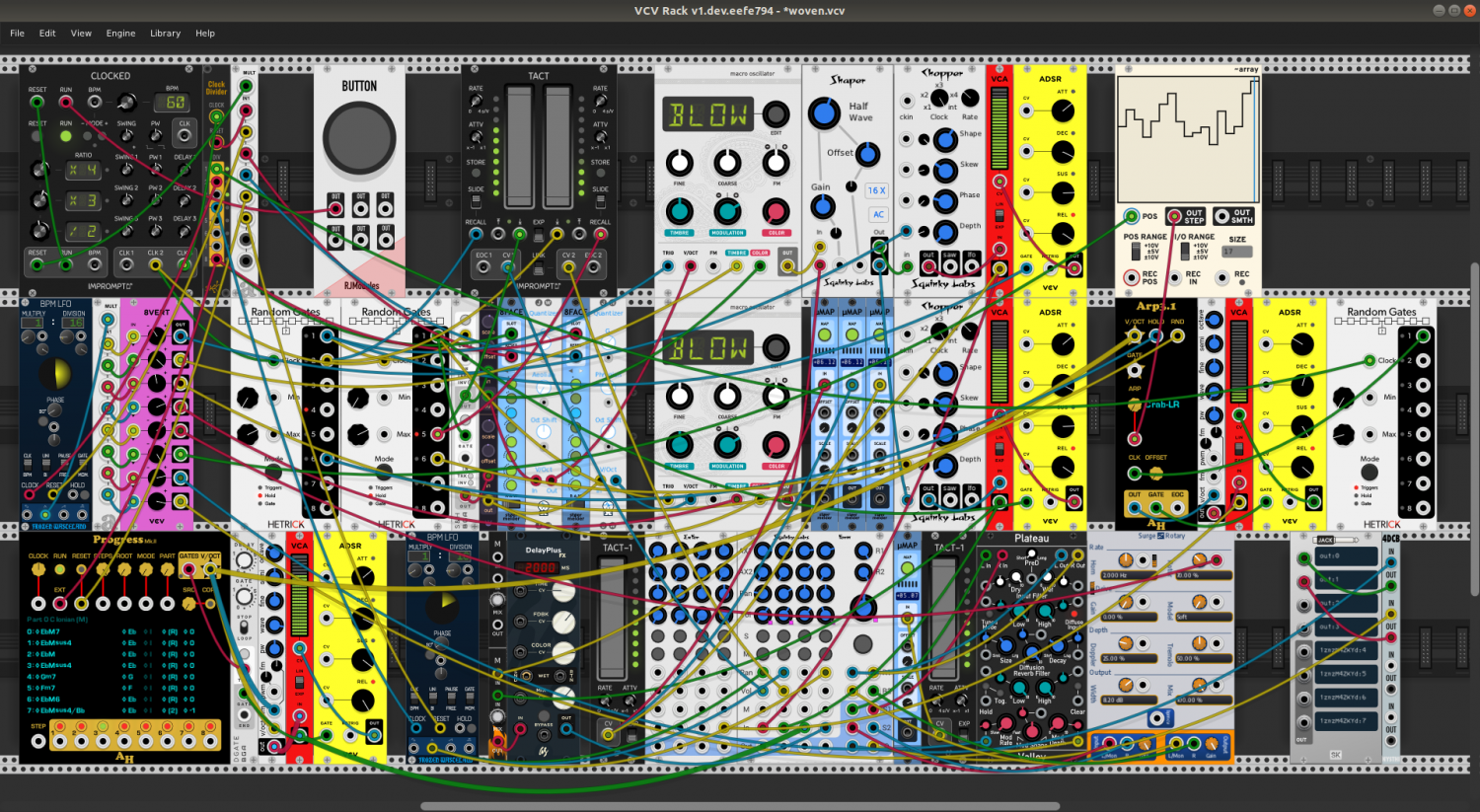 Woven is a continuation of experiments in sensible melodic improvisation by the machine. The patch is built around four primary players, each with a strictly assigned role.

The harmonic core is structured with a chord progression module that performs a series of eight chords. The harmony is simple diatonic movement in Eb, with progression only to the III and II. A mild cadence is produced by the eighth chord before returning to the start of the cycle. The harmony instrument is a basic polyphonic VCO producing a sine wave with a very slight amount of FM. Its output is treated by an envelope generator and global effects (see below).

The melodic material is generated by a simple arrangement of a sample & hold module, an attenuverter, a pitch quantizer, and a presets sequencer. Two such arrangements create the melodies performed by a pair of macro oscillators in a mode intended for wind instrument designs. Each oscillator is processed by a shared waveshaper, individual tremolo modules, and individual envelope generators before heading to the mix. Although the selected mode is based on an end-blown instrument model careful manipulation of the envelope generators – along with LFO control of some internal parameters – produces a sound more like a bowed instrument. Curiously, the oscillator’s bowed instrument model did not satisfy my criteria for my design’s basic sonic material, i.e. I didn’t like the way it sounded.

A bass part is added by using a slowly-driven arpeggiator acting on the generated chord series. The bass instrument structure is straightforward except for the use of a random gates generator to provide the clock for the arpeggiator. (That trick resolved a phrasing issue, btw.)

There is a fifth channel to the mix but it is not a unique instrument. The processed outputs from the macro oscillators are mixed to a monaural signal and sent to a delay unit set to a 2-second delay time. The delayed output is then sent to the fifth channel to support and enrich the sound of the melodic players.

The master mixer provides global reverb used by all instruments. It also provides a rotary speaker effect used only by the chord player. Panning is applied to the “bowed” instruments and their delayed blend.

Once started the patch is self-generating. However, I usually perform it by delimiting the chord cycle for an introduction and ending fade-out. The steps of the chord module and the presets sequencers can be limited in performance, a handy feature.

The more I play with VCV Rack the more I find myself spending time on the details of each module and its settings. Careful design includes a sensitivity to the cumulative effect of many small amounts of applied processing and/or parameter values. In other words, while there is much that is random in my patches there is nothing random in the initial designs of the sound generation cores. True, the use of LFOs on the oscillator parameters guarantees a controlled randomization of conditions, but the initial conditions are selected purposefully.

Woven can run for as long as you like. I prefer to play it during the early hours of the day, at dawn if possible. The version heard here is an excerpt from a much longer performance recorded with ecasound and edited in mhwaveedit, two stalwart members of my Linux audio armory. The video was made with a script written by my friend and Csound colleague Michael Gogins.

So let’s meet the band:

Deepest thanks to them all. They never missed a rehearsal, they played in tune, and they stayed sober the whole time. What more can a bandleader ask for ?

dave_phillips
841 PM
Chat about this patch on Discord! Download (96)