Wish You Were (Quantum) Hair — generative patch from my Sept. 8th livestream 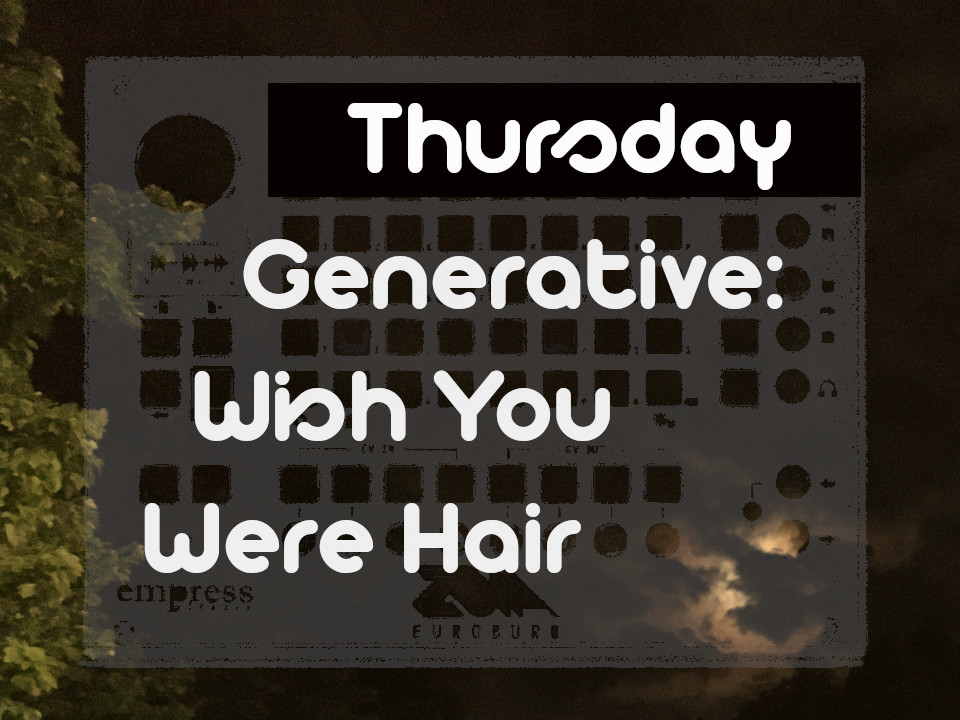 I’ll have more complete patch notes ready when we go live, but this is sort of an anniversary show. I did my first generative livestream almost a year ago, on September 11th, 2021. It’s been a trip. Come, listen, hang out.

So, first, the name. First, naming patches is hard. It’s hard to come up with sixteen characters that seem representative of a patch. Anyway, the name comes from me 1) needing a name, and 2) having just watched a lot of videos about black holes and the information paradox and the potential solution of quantum hair. And ya know, quantum hair is just the sort of thing that sticks with you (and maybe to the surface of a black hole). So, a silly riff on a Pink Floyd album, and here we are. Hair we are. Har har.

Okay, that out of the way.

There’s a lot going on in this patch, but there are three basic sound sources: a trio of modulated bandpass filters, a little FM synth, and a not-quite chord synth.

The bandpass filters. Noise is randomly aliased before being fed into the filters. Each filter’s frequency is randomized. The resonance of the filters is modulated, the effect of which is that sometimes the output of the filters sounds more like noise and sometimes more like sine waves (at high resonance). The envelopes of the filters’ VCAs are also modulated, which has a pretty dramatic effect on the sound. When they’re shorter, you hear percussive elements, longer envelopes can be more textural or harmonic (depending on the state of the filter). The envelopes themselves are triggered by a ratcheting sequencer, with the ratcheting randomized and then probabilistically determined as to whether it is passed to the envelope or not. A lot, I know. I’m probably forgetting something. Oh, the rate of the sequencer is randomized every fourth time it passes around. Fun fact: I started this patch thinking it would be a very rhythmic patch and it ended up not being that. This is the sort of glitchy heart of the patch.

The little FM synth. So, this is a very basic 2-operator synth. The carrier is fed back into itself, and a modular pitched just a touch over an octave above is also fed into the carrier. (Tip: if going for a more harmonic FM sound but with a bit more movement, tune the modular to the harmonically pleasing interval — fifths and octaves work well — then detune it just a smidge.) Both those pathways are modulated, changing the timbre from very mellow to more metallic and assertive. The voice is triggered by a sawtooth LFO which has a rate modulated by a ramp LFO, so basically the sawtooth gets faster and faster. The output of the sawtooth LFO is sent through a probability gate to determine if it is passed to the carrier’s VCA. The LFO is also multiplied a few times to give it an exponential decay curve. Each time the LFO passes through, a new note from an F minor pentatonic scale is selected.

The not-quite chord synth. Not-quite because it’s just a root and a fifth. But it sort of kind of provides a pad sound. The oscillators are triangle waves, and they pass through a static low-pass filter to rub off some of their harmonics, dull them a bit. A looping envelope — the only really, truly regular thing in this patch, in terms of tempo — shapes the output of the synth. But that output is then fed into the VCAs of the bandpass filters, so it gets modulated along with their VCAs, causing it to flicker in and out of existence (or last longer, depending on the vagaries of those modulated envelopes). Sometimes this is a very potent element of the patch, sometimes little more than a texture added to the rest of the noise.

Everything then passes into a Cosmos-style offset delay (offset 7/8ths, which was a ratio I arrived at when I thought this was going to be a rhythmic patch; but it does well to add some structure to the composition). The input and feedback of the delay are modulated, because it can sometimes be a little much, and sometimes a little much is just the right amount, but definitely not all the time. Solid, clear exposition, Christopher.

After that comes a reverb lite, and then out into the world.

To do some kind of anniversary, reflective work: like a lot of the patches I’ve made over the past year, this patch began some place very different from where it ended. There are a lot of technical shenanigans going on here, but a lot of those were “felt out” rather than the result of some complex, Rube Goldberg-ian plan. The way I build better mouse traps is by building worse mouse traps and figuring out how I can improve on them. But the worse mousetraps do come first. So, if anyone’s interested in diving into this rabbit hole but maybe intimidated because it seems complex, I’d say complex things are almost always the result of simple things strung together, and your instincts and ears are more important than any grand, totalizing concept of the patch. Thanks for listening, Christopher.