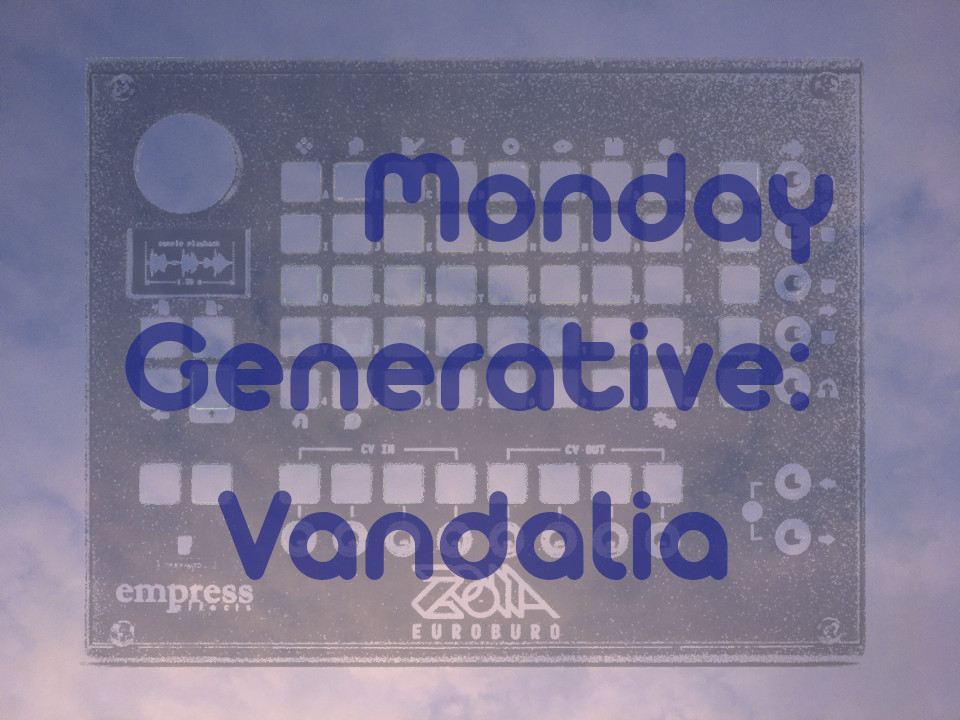 I don’t know as this is going to come across the same to you as it does to me, but this patch sort of reminds me of one of my favorite moments… which is when the orchestra is warming up prior to a performance, and you catch stray, overlapping bits of melody that sometimes dissolve into a pleasing, consonant noise.

There are three FM voices, made from self-feeding sine waves. The FM amount is modulated, and the VCAs for each voice are controlled by sine wave LFOs that are modulated each cycle, so sometimes you get quick flourishes, and sometimes much more drawn out sounds. Two of the voices are panned randomly, while the other is centered in the stereo field.

The notes are randomly selected from an A major scale or an E minor; when the E minor scale is selected, the LFOs are slowed. The quantizers are also modulated by an LFO, so the pitches rise and fall over time. A good mixture of randomness and order.

There is also a randomized (depth and rate) vibrato that is applied to all of the voices simultaneously.

The voices then go into a pair of stereo loopers, which randomly record sections and play them back an octave above and in reverse.

All of this is fed into some high-pass filters to clear out the low end, then a Cosmos-style offset delay, and finally a plate reverb.

Vandalia is one of the names originally proposed for West Virginia, and the one that has always captured my imagination the most. It originates from a British colony proposed in the 18th century that would have covered much of the state. When West Virginia broke from Virginia during the Civil War and became the 35th state, they needed a new name. There were quite a few considered, among them Vandalia. For me, it has always present a sort of… alternative history for West Virginia, one maybe characterized more by magical realism than the social realism that ended up describing so much of its history; a place where beautiful things are discovered, rather than horrific ones.

christopher-h-m-jacques
6876 PM
Chat about this patch on Discord! Download (52)