The Somnambulist — generative patch from my April 30th livestream 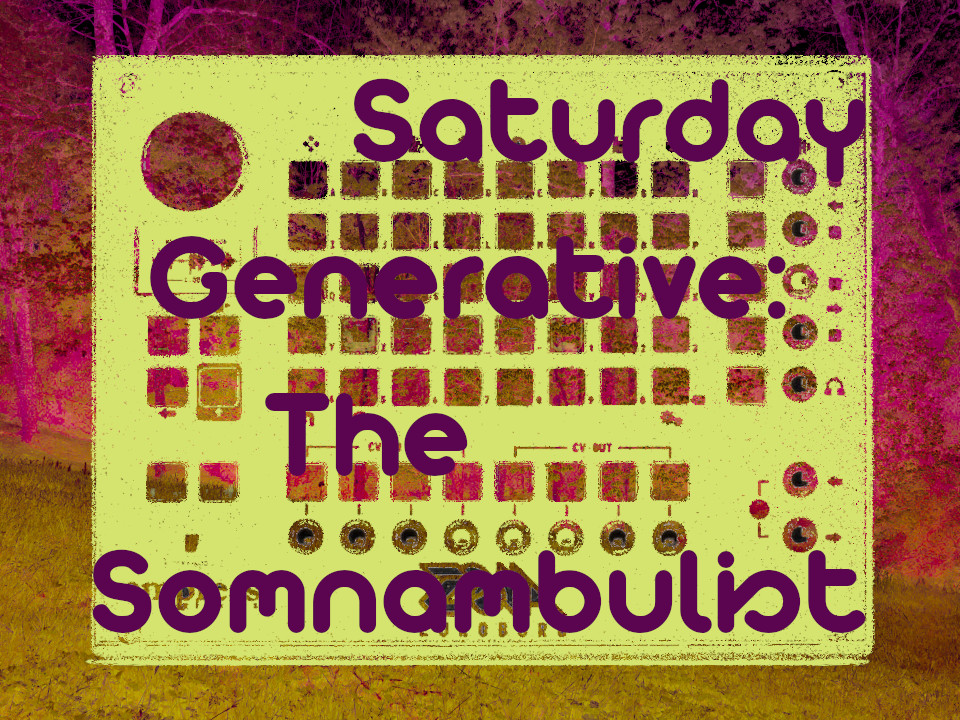 The synths used in this patch are pretty simple. The signal path they follow is not.

There are two FM voices. One is a simple, single oscillator voice fed back into itself to give more harmonic content. It has a fixed, plucky envelope. The other voice uses two oscillators. The carrier feeds back into itself post-VCA (so the feedback is modulated by the envelope). The other is an oscillator one octave above, which utilizes a randomly modulated sine wave to control the amount it is fed into the carrier. These voices go into a slightly resonant low-pass filter, and the envelope which controls the VCA and envelope is modulated, so it takes on a variety of articulations.

Both voices randomly select notes from an A minor pentatonic scale.

Okay…. so, this is where things get a little complicated.

The simpler voice goes into two loopers. Both play in reverse. One is fixed at pitching up a fifth. The second is variable, playing back at an octave below, a fifth below, or at the same pitch as the input. Both use a randomization program to decide when to record, so sometimes they record the same material, sometimes entirely different content.

The simpler voice and all of the loopers go into a fixed low-pass filter to make some of the pitch effects a bit mellower.

The more complex voice and the output of the low-pass filter (the simpler voice and all of the loopers) go into a high-pass filter to cut out some low-end muddiness, then into a ping-pong delay network sort of modeled on the Soma Cosmos, with its blur aspect employed (the delays are asynchronous and cross-fed into one another).

The more complex voice also goes into a granular module, pitched an octave down. This goes through a separate high-pass filter that is less aggressive than the one used for the other elements, because here we’re trying to introduce low-end heft. Then this, too, is fed into the delay network.

Then everything goes into a plate reverb because why not?

The sum of all of this is a patch that is -not- terribly dynamic (the voices are simple; their control mechanisms are also fairly simple) but at the same time is constantly evolving as the delay lines smear their contents, and the loopers record the output of the synth voices and then subsequently change it. It’s a nice, drifting patch, that doesn’t travel too far, but has some lovely, dreamy scenery.

christopher-h-m-jacques
6651 PM
Chat about this patch on Discord! Download (170)