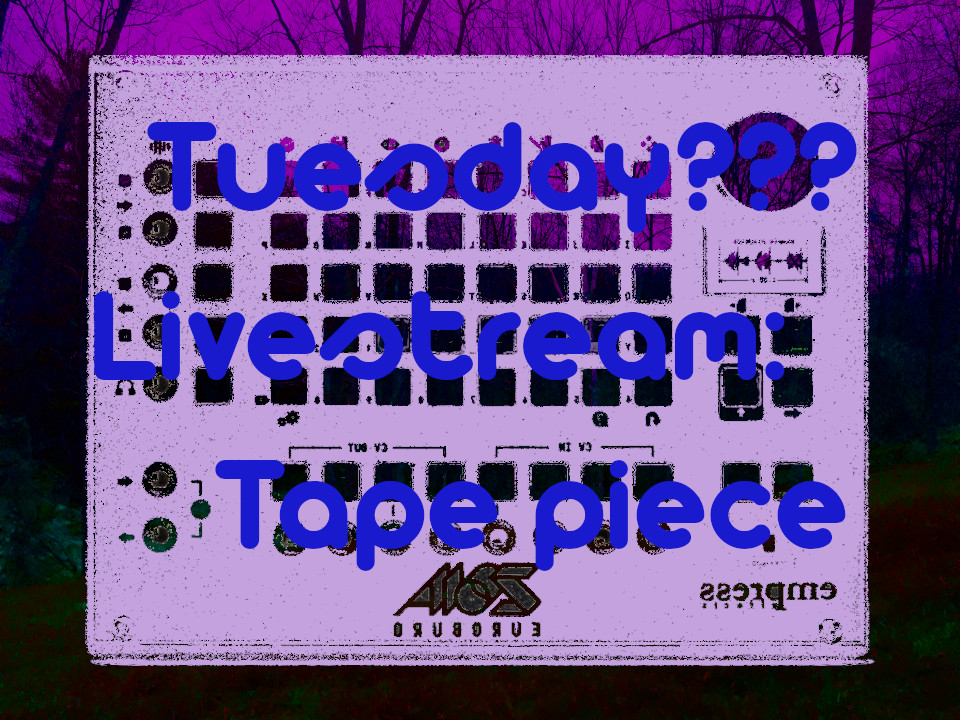 Another off-schedule stream. I don’t think this is going to become a habit. But I keep making patches, and I took Saturday’s stream off to help with the Bootcamp, and this coming Saturday’s devoted to the also-rans (finally… really building up this showcase of… failed patches). Anyhow, this is an outlet.

This patch arose because I was trying to make a really cool, distorted reverb sound — cinematic stuff — and it just……… failed miserably. For whatever reason, feeding the reverb lite into a distortion/OD module makes it clip, or sound like its clipping (the inputs don’t flash and if I monitor them nothing seems amiss), for some reason (this is not the case with other reverb modules, in case you were wondering, so I think something funky is going on with how the reverb lite is structured, but I’m not really sure). Everything got very compressed and the dynamics got kind of nuts.

So, I said, that’s the sound! Specifically, it sounded like recording direct onto an old 4-track cassette player. Bad, but in a good way.

There are three different voices, all based on very simple sine waves FMing themselves. The first is a chord synth, with three oscillators. It fades in and out on a cycling envelope, with the amplitude of that envelope heavily modulated by LFOs, as well as noise to provide some artifacts.

The notes from the chord are used by the next voice, which has a sort of “piano”-ish sound (the illusion is better through our blown out tape foundation); sometimes it transposes them up an octave, sometimes down an octave. It meanders in and out.

There’s a third voice, which just holds drone notes for a while. Its output is, again, heavily modulated by LFOs as well as noise.

All of the oscillators are also modulated by three triangle LFOs mixed together with a multiplier and also modulating one another to produce an uneven, unpredictable vibrato.

The chord synth and the drone synth go into a static low-pass filter. The “piano” has a separate low-pass filter that is used to create its timbre, as it is modulated by the same envelope which controls the voice’s VCA (and in turn the FM amount applied to that oscillator).

In terms of sophistication, it’s not the most interesting patch I’ve ever made. But it does have a _sound_ that I quite like (since I like the sound of old chewed up tapes).

Everything is quantized to D major pentatonic. I started with a minor pentatonic, but it was just too dismal for this already dismal sound.

My album of generative patches: https://christopherhmjacques.bandcamp.com/releases

christopher-h-m-jacques
6649 PM
Chat about this patch on Discord! Download (187)