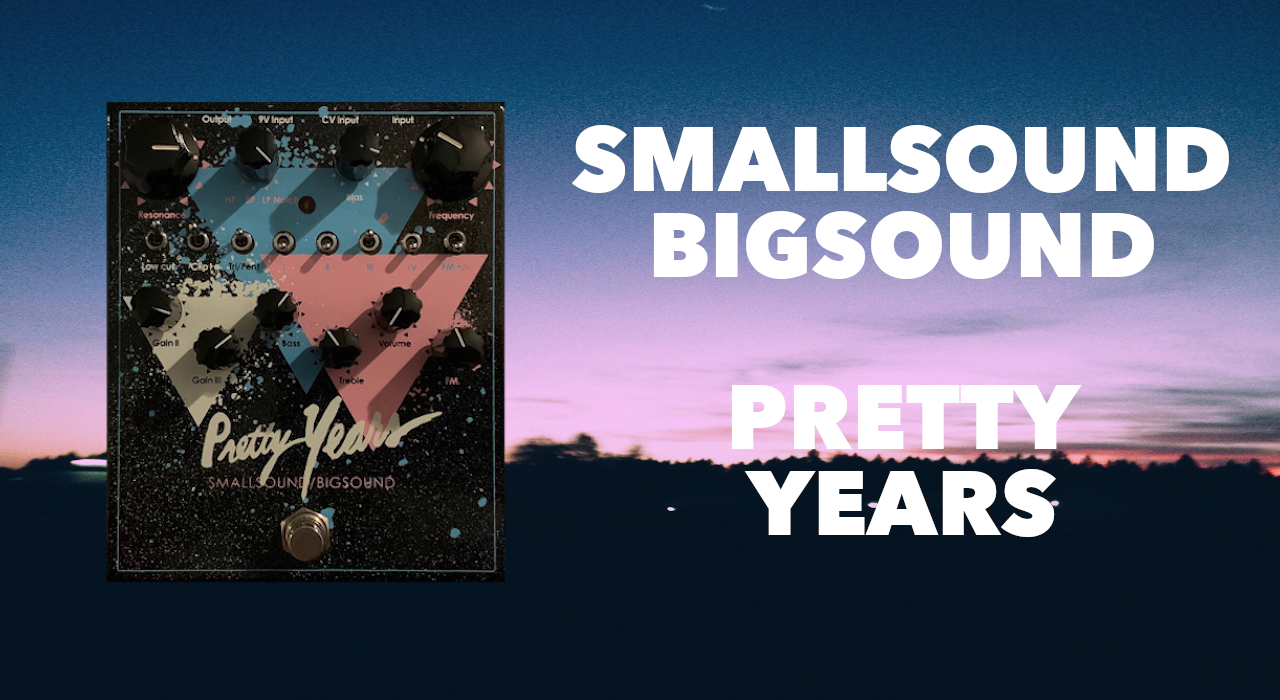 The creation of this patch got me back into making patches. And the impetus for that was the arrival of the SSBS Pretty Years, a rare distortion/filter unit that uses sub mini tubes and some wild routing.

Basic idea: overdrive/distortion/fuzz pedal on the surface with 4 gain stages and passive EQ. Underneath is this complex routing that comes about when you introduce the voltage-controlled filter section. There are 4 insert points for the VCF (between each gain stage). Here’s a quick guide on what a single activated insert looks like at each separate stage:

VCF has 3 options: LP, BP, HP. Depending on where the VCF is insert, you get very different output based on the VCF settings, gain levels, EQ, and output volume.

All controls apply to both ZOIA and Zebu versions, unless otherwise noted. Audio routing is mono in (L) to stereo out.

I, II, III, IV (UI buttons) – placement of VCF. Can only select one at a time to avoid feedback loop. Will turn off other inserts when selecting a new one, or you can toggle the same one over and over again.

– Out 1: Envelope follower (sources from input 1)
– Out 2: Inverted envelope follower
– Out 3: Trigger, sends a 10v pulse whenever a filter insert is toggled

VCF page – VCF routing and mixer logic
CV in for VCF frequency. Filter selection via Left stomp and sequencer. Each of the 4 inputs has its own VCA, with level for each determined by the insert points on page 0. All of the VCA’s go to the VCF with 3 outs (lp/bp/hp), sent to audio in switch (channel determined by Left stomp).

VCA page – audio routing
4 separate mixers for each gain stage. Channel A’s are the output of gain 1, 2, 3, and 4. Channel B’s are the VCF, with channel selection via insert points on page 0. Outputs to the next gain/EQ along the main routing.

I-IV page – radio button logic
Logic for determining where the filter insert is placed, responds to the UI buttons on the control page.

1.7: Adjusted the routing so that the Sag circuit is included before the final insert point (this differentiates the sound between the VCF at III and IV a lot more). Volume compensation removed and levels set to appropriate amounts. Changed the pushbuttons on the UI page to radio buttons and replaced the Right stomp bypass with a step sequence for the insert points, which work in tandem for choosing where the VCF is placed. VCF type and FM Behavior UI buttons are also combined with L/M stomp logic so that either can be used. Switched the order of the filter types (LP – BP – HP). Removed the possibility of making feedback loops. Slight adjustment to control placement.

1.6: Moved around some controls on the UI page. Slight adjustments to defaults. Renamed the patch to “Glamour Years”.

1.3: Fixed issue where middle switch triggered the FM toggle CV in switch, causing the filter to temporarily ping between presses (now goes in order from None > Inverted > Non-inverted). Added some volume compensation to the insert points (these route to the Volume value for a bit of boost whenever an insert is added).

1.2: Fixed mixer issue where II caused excess gain and unwanted feedback when combining with other insert points. Adjusted biasing for Gain 4 control and added expression-via-MIDI (CC 10). Set a better default value for all controls upon patch load. Removed need for DELETE ME module, as v1.09 and above seem to allow for a bit more CPU usage.

1.1: Changed bias point on Output gain. If you downloaded this early, change the bias on output gain to -11.18dB (while Volume is set to -1). Added SoundCloud upload as sound demo.

meanmedianmoge
980 PM
Chat about this patch on Discord! Download (4134)