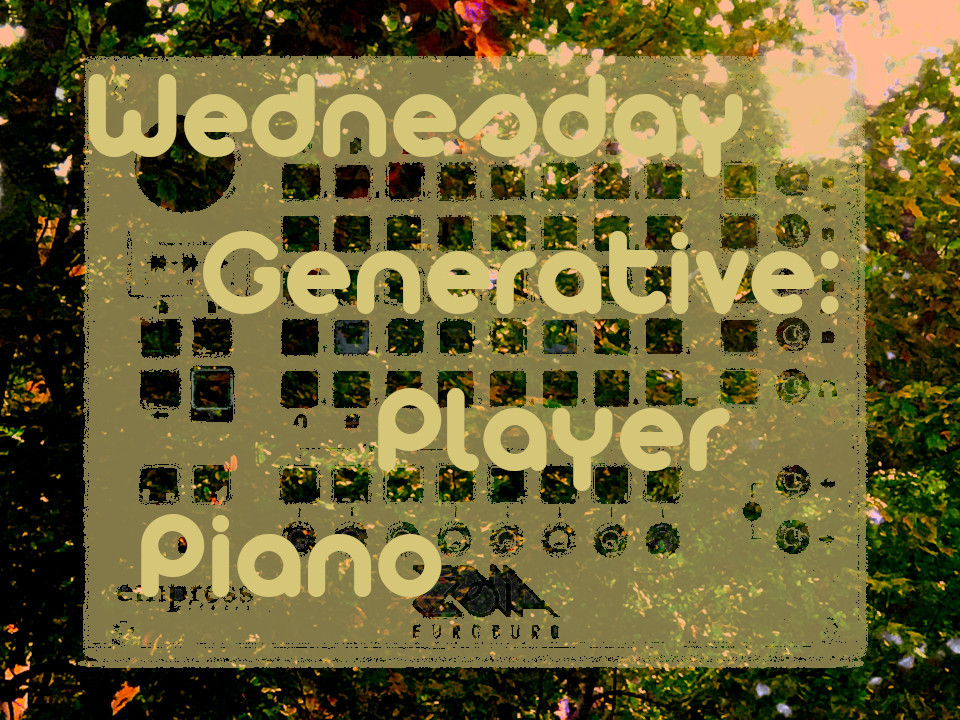 The patch is made of four self-FM’ing sine-based voices. The voices are broken into two groups, one clocked by an LFO, and the other clocked by its inversion via comparator, with the duty cycle of the LFO adjusted to provide some slight swing between the two groups.

The voices are spread across the stereo field. Each one has a four-note shift register, but the shift registers are seeded by the preceding voice’s shift register, from left to right, with the left-most voice being the only register that actually introduces new notes (from a C minor pentatonic scale). One voice is shifted up a fourth, and the other shifted up a fifth, so that as the notes travel from left ro right, some basic harmonies are introduced.

Two of the voices have more attack-heavy envelopes, which produces a kind of “reverse” sound, while the other two have more decay-heavy envelopes, for pluckier/more percussive sounds. (The envelope lengths are randomized in rough divisions/multiplications of the clock.) The intensity of the envelopes is also randomized, to replicate varying velocity (and to keep things more interesting).

Then everything goes into some high-pass filters (to clean up the low-end), before running into a tape pingpong delay, and a reverb lite for ambience. It’s a not-terribly dynamic or diverse patch, but I like the sound of it.

… But I didn’t always. So, the name was attached to it some months ago, when I first wrote the patch. At that time, it had a much more mechanical feel to it. And I’m sort of reminded of Frank O’Hara’s famous poem, “Why I am not a painter” (which is about the complicated relationship between inspiration and revision):

I am not a painter, I am a poet.
Why? I think I would rather be
a painter, but I am not. Well,

for instance, Mike Goldberg
is starting a painting. I drop in.
“Sit down and have a drink” he
says. I drink; we drink. I look
up. “You have SARDINES in it.”
“Yes, it needed something there.”
“Oh.” I go and the days go by
and I drop in again. The painting
is going on, and I go, and the days
go by. I drop in. The painting is
finished. “Where’s SARDINES?”
All that’s left is just
letters, “It was too much,” Mike says.

But me? One day I am thinking of
a color: orange. I write a line
about orange. Pretty soon it is a
whole page of words, not lines.
Then another page. There should be
so much more, not of orange, of
words, of how terrible orange is
and life. Days go by. It is even in
prose, I am a real poet. My poem
is finished and I haven’t mentioned
orange yet. It’s twelve poems, I call
it ORANGES. And one day in a gallery
I see Mike’s painting, called SARDINES.

So, while the original patch had a much more “mechanical” feel to it, it was too much. Yet, here I am, left with a patch called Player Piano, because that is part of the process. This patch is more like Mike’s method, but others are more like Frank’s.

christopher-h-m-jacques
7307 PM
Chat about this patch on Discord! Download (54)