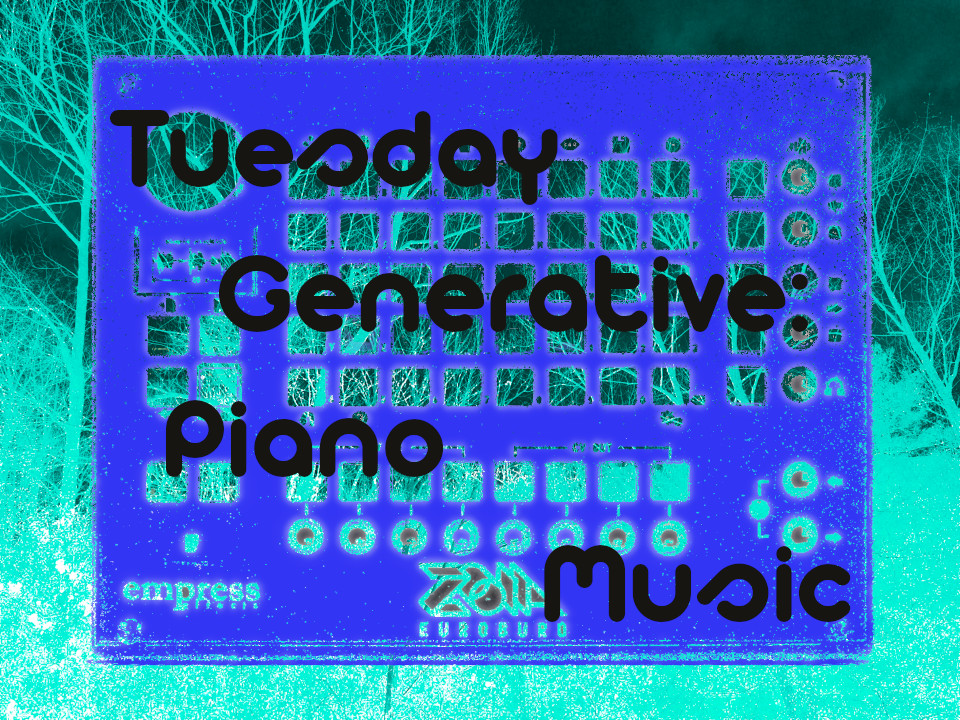 I can tell you there are no pianos in this piece; I named it that because I was going for a vibe kind of like a piano duet. There are two versions bundled in this download: PM uses a very basic physical modeling/modal synthesis approach to change the timbre of the voices (there are some other, minor changes as well).

The central idea of this patch is two voices sharing a common set of notes — a bit like a fugue. Voice 1, or the lead voice, has its notes and gates randomly generated. Then, these notes and gates are passed to voice 2, the follower, through a shift register. Sometimes voice 2 is transposed, to harmonize on those notes. Sometimes it takes notes from different points in the shift register — its echo coming two or four or more beats later. Sometimes it plays the same thing as voice 1, at the same time. Sometimes it plays off beat. It also freestyles a little, changing its tempo and drawing from its own set of randomly generated notes, rather than the ones voice 1 uses. These little varieties add up, making the second voice into less of a mindless automaton, simply following a leader, and more of an accompanist, capable of adding its own flourishes.

The voices themselves are composed of sine waves, fed back into their FM inputs, then passed through a low-pass filter (this is a similar design to the “piano” I used in the last livestream, for “Tape piece”). The sound is a little like an electric piano at times, but it can also/does read more “synthy” for passes (especially when the second voice moves at double speed).

To keep things interesting, there is a ton of modulation going on, including of modulation of the voices’ amplitude, so this note-sharing may not always be heard. The envelopes are modulated as well, along with a bunch of the generative parameters.

The voices pass through a looper-delay. Its speed-pitch is randomly generated, with weight places on shifting down an octave, but there are also possibilities for shifting up an octave. All of the audio is reversed (but since it is a delay and fed back into itself, sometimes the repeats are reversed once more, playing forward). The output of the looper is modulated, too, to keep it from becoming “too much.” It’s a nice spice, but it can take over the stew. Or something.

All of this passes into some high-pass filters to tamp down a bit of mud (I love sine waves, but they do produce a lot of energy at the fundamental). Then, it goes into a plate reverb for air and ambience.

Anyhow, I really enjoy this patch. I’ve been listening to it -a lot- over the past week. That’s part of why I’m doing this livestream now; I don’t want to get sick of it, ha.

christopher-h-m-jacques
6651 PM
Chat about this patch on Discord! Download (153)