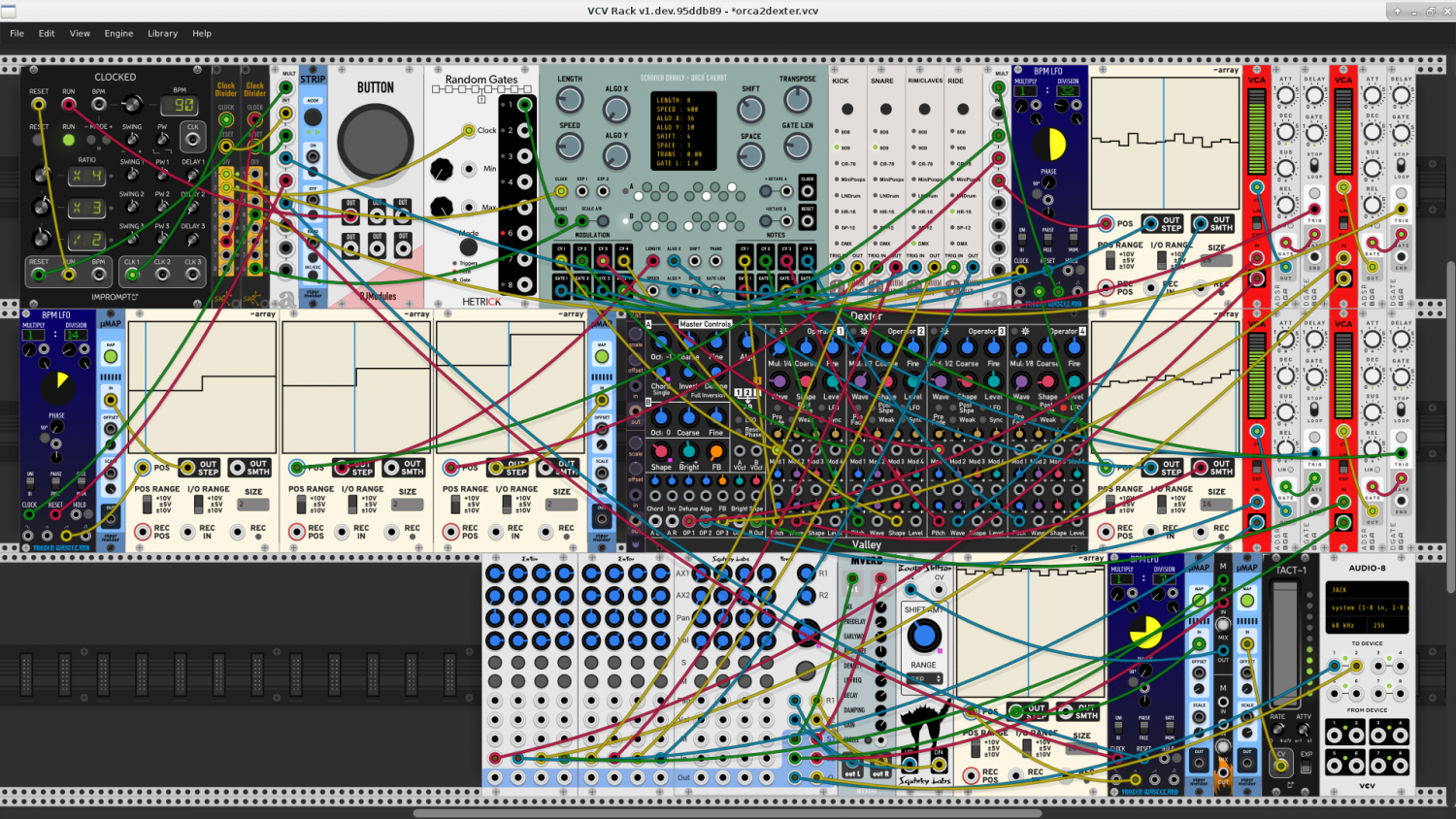 Dexter can be used as a typical 4-op FM synth – think chiptunes, soundcard synthesizers, early computer soundchips – or it can be deployed in a less conventional manner. I’ve opted for the latter option here: Each operator is treated as a standalone synthesizer, giving me four convenient targets for the four outputs from the sequencer. Without going into mind-numbing detail, I’ll simply mention that the first three operators are modulated at three points each. Operator 4 is a special case.

Operators 1 through 3 function as audio sources with their own output ports. Operator 4 functions as an LFO modulator to operator 3, and thus has no audio output. However, Dexter does a neat trick with its operator algorithms, giving certain arrangements two output designated A and B. I’ve taken advantage of that feature and used the B output port for the fourth channel audio source.

Two PdArray modules modulate Dexter at its Master Control level. Each array provides only two values for toggling between specific settings for the Chord and Shape selectors. A third dual-value array controls the Length value for the sequencer. All other modulation occurs by way of the BPM LFOs and/or the remaining PdArray modules.

Each operator includes a hidden set of tools for wavetable/waveform selection, LFO status, modulator targets, mode settings for the Shape and Sync functions, and various other switches. These tools are not incidental, so I’ve taken care with the settings for the individual operators.

A note on the percussion: Yes, I know it could be much improved, but 1) I needed a serviceable solution quickly, and 2) I know exactly what I’m getting from Autodafe’s drums. I admit that the part is a “service” part, a future version might turn over the percussion part to Valley’s uGraph rhythm sequencer and a fancier section.

Processing is minimal. Global reverb is applied to all instruments at the channel level. The percussion is further treated by a second global processor, the Booty Shifter frequency shift module from Squinky Labs.

A wholesome group, my gratitude to them all. Greetings and salutations to my friends and colleagues in the VCV Rack community !

Dave_Phillips
612 PM
Chat about this patch on Discord! Download (103)