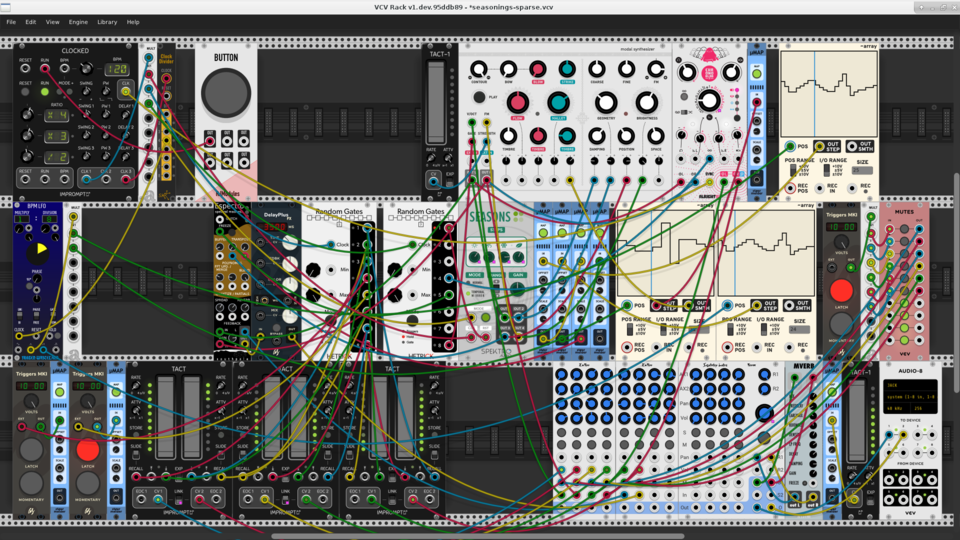 Return with us now to those thrilling sounds of yesterday’s tape & electronic music. Unabashed squeeks, squinks, squonks, blips, blats, bleeps, whirls and whizzes, all awash in varying densities of reverberation and delay, all treated to an unpredictable mixture controlled by random gating, stoermelder uMap modules, and unequal array reads. And this is the sparse version.

A single instance of the Elements modal synthesizer feeds two audio-hungry processors, the fantastic Chronoblob delay from Alright Devices and the incredibly powerful Smoke granular processor, Southpole’s realization of the Clouds hardware module from Mutable Instruments. One channel from Smoke’s output is further treated by the AS DelayPlusFX delay line.

As noted, the mix is subjected to continuous and discontinuous modulation. The individual channel levels of the Tact modules are controlled by random gates, but on two Tact controllers the Link switch is also controlled externally, this time by using a combination of voltage triggers, control mappers, and random gates. The sudden switching creates a desirable discontinuity in the otherwise always smoothly ebbing and flowing soundstream.

The remaining array modulates one parameter each on the Elements and Chronoblob modules while the sequencer modulates four more controls on Elements, thus creating a variety of colorful sounds. All aided by the sonic mutations provided by the Smoke module’s spectral processing mode (aka Espectro).

The array modules deserve particular mention. As noted, they are of unequal size at 11, 24, and 25 points each, but their cursor positioning – the value read by the Pos port – is controlled by a single BPM LFO. Two arrays are indexed (read) with a triangle LFO thus reading the array back and forth. The remaining array is read by the LFO’s ramp wave, returning to the start of the array when it completes a read.

The Smoke and Elements modules include their own reverb, so no global reverb has been added to their mix channels. Some channel reverb has been applied to the Chronoblob output, though admittedly I’m gilding the lily here. That said, I like how it adds another nice flavor component to the reverberation in the mix.

A bank of mute switches is available for more control over channel activity. However, they are left unused in the recording of the “sparse” version of this patch.

Truly seasoned players all. (Sorry, it had to be said.) Studio D sends best regards to the gang, with many thanks for coming out to play. We’ll have to do it again sometime soon.

Dave_Phillips
612 PM
Chat about this patch on Discord! Download (110)