In The Space Between 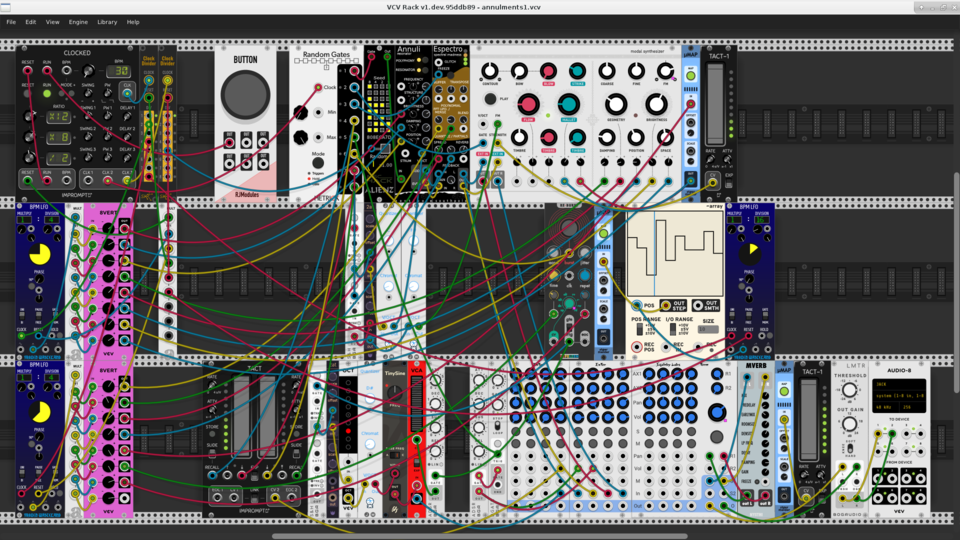 Sounds as colors cast over the canvas of time.

First in a series of three pieces exploring the Southpole Annuli module, aka Mutable Instruments Rings which is also available as the Audible Instruments Resonator. Alas, the Southpole plugin for VCV Rack v1.x is not yet available in the Rack plugin Library, but private builds can be found on the official users group Facebook page (use the Search, Luke). It might be possible also to use the AI resonator module in place of Annuli.

Output from an Alienz noise module is processed by a single instance of Annuli before moving into its first audible realization from the Smoke module running in its Espectro “spectral madness” mode. Smoke is the Southpole version of the Mutable Instruments Clouds module, aka the Audible Instruments Texture Synthesizer. Again it may be possible to replace Smoke with the AI module, but again I haven’t tested it.

A random “sine wave obbligato” is heard throughout the performance. Surprisingly, its source is a rather complex instrument built from a burst generator, a graphic array controller, a BPM LFO, a uMap module, a Tact controller, a sample & hold module, an attenuverter, an octaver, a pitch quantizer, a VCA with ADSR envelope generator, and of course the sine wave oscillator.

The patch is simple enough, but the instrument design and control is rather complex. The usual traffic managers and routers are at work here, the patch is built on my basic template, and only a few other modules have been deployed. I like economical patches, I find it challenging to create deep rich sound worlds with a minimum number of modules. The performance is likewise minimal regarding my intervention. The patch is meant to play with “hands off”, so once the big button is pushed the patch does the rest, more or less according to its design considerations.

Recorded with ecasound, edited with mhwaveedit, on a Linux system running Fedora 23 with extensions from the Planet CCRMA project.

A deeply respectful bow from the waist to them all and to all developers of VCV Rack and its plugins. As deep a bow as well to my friends and colleagues in the fine community of VCV Rack users. Voyagers all, may their journeys be blessed.

Dave_Phillips
612 PM
Chat about this patch on Discord! Download (123)