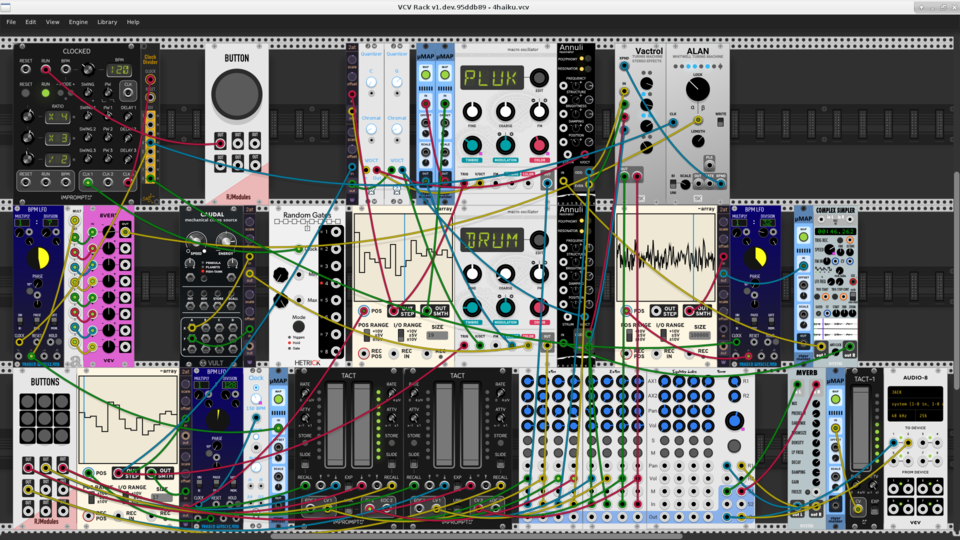 The sample used in this patch is available at http://linux-sound.org/misc/4haiku.wav

The piece is organized in four sections. An instrumental prelude leads to three treatments of a previously recorded reading of the four haiku. Eight channels of audio are heard in successive pairs, i.e. first you hear channels 1 and 2, next channels 3 and 4, and so forth. The channels are planned in this manner:

The complexSimpler module plays the original sample with playback speed modulated by an Array module loaded with a very short WAV file.

The point of the exercise is the treatment of the voice, thus I made no attempt to maintain intelligibility of the texts. Incidentally, the “accompaniments” heard with the readings are the results of the treatments by the Annuli resonators, no other instruments were employed.

The Vactrol mix blends the stereo outputs from the Annuli modules. The Vactrol mixer itself is controlled by the ALAN sequencer, a rather cool and unique creative feature.

The PdArray ~array module is critical to this patch, creating and controlling modulation gain curves over various module parameters. The stoermelder uMap module is deployed in similar manner, providing another wonderful layer of modulation control.

The performance was recorded with ecasound and edited with mhwaveedit. Everything at Studio D runs on a Linux system based on an old but trusty Fedora 23 with a realtime kernel from the CCRMA project.

With two exceptions I’ve used only free and open-source modules. The Vult and NYSTHI modules are closed-source projects, but both are freely available and can be found in the VCV Rack plugin library. Also, the Southpole plugin for Rack v1.n can be built from source but as of 1 November 2019 it has not reached the library. However, a search for Southpole binaries on the Facebook Offical Users group page yields results for all three supported platforms.

A grand salute to them all and to the entire community of VCV Rack’s developers and users.

I believe I am,
interdimensionally
speaking, right, of course.

Sunlight fills the room,
its bright warmth pervading all.
Sun’s radiance: you.

My own opinion,
squeezed like toothpaste from a tube,
not recommended.

Dave_Phillips
515 PM
Chat about this patch on Discord! Download (76)