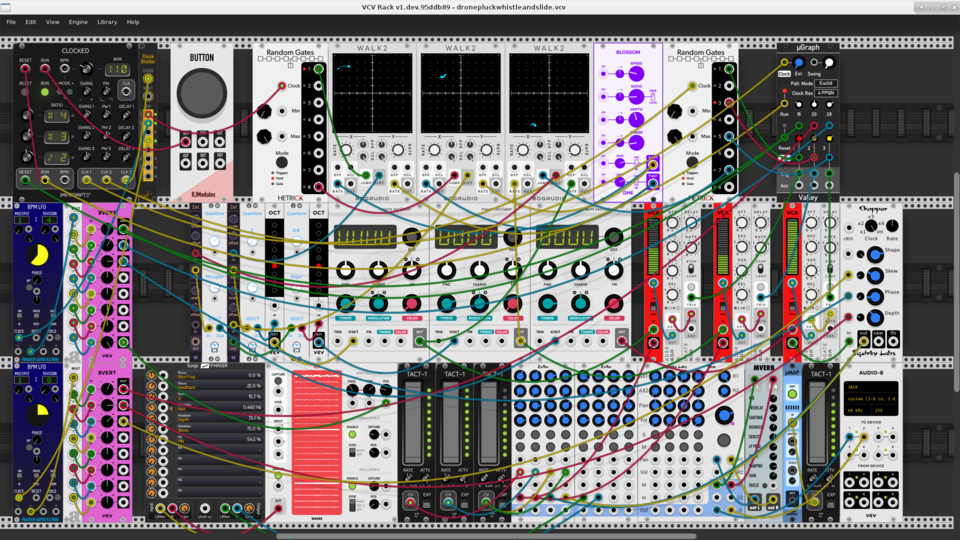 Checking out some modules new to Studio D while using a familiar module for an unusual sound.

I’ve used uGraph as a primary rhythm sequencer in other patches and in similar fashion. Pattern mode is Euclidean dynamically modulated by the BPM LFOs, fills are triggered by the random gates generator, and the sequencer’s triggers are routed to the EG/VCA groups.

Pitch sequencing is handled here first by the Walk2 modules. The output from each module is attenuated, quantized, and repitched (if needed) before reaching the v/oct port of the macro oscillators. The Walk2 Jump parameter creates a sliding/glissando effect at random moments according to its rate settings. The rates for two modules are controlled by the Blossom paired LFO curve generator, the third Walk2 Jump is triggered by a random gates module.

Re: the macro oscillators: Each oscillator is an unmodulated instrument with a fixed design. Two are plucked-sound instruments, the third is something like a tremolo’d pennywhistle with a bagpipe extension. These sounds are atypical of my previous use of this oscillator model (band-limited 2 pulse train), underlining again how much I have to learn about even the familiar modules.

The drone results from an instrument made with a wavetable oscillator and a phaser effect. Along with a little global reverb the instrument resembles – or at least assumes the role of – a tambura, an accompaniment instrument responsible for maintaining the drone of a raga in Indian music.

Recorded with ecasound, edited with mhwaveedit, on a Linux system running Fedora 23 with extensions from Planet CCRMA project.

Dave_Phillips
612 PM
Chat about this patch on Discord! Download (79)