Drone Machine — generative patch from my May 9th livestream 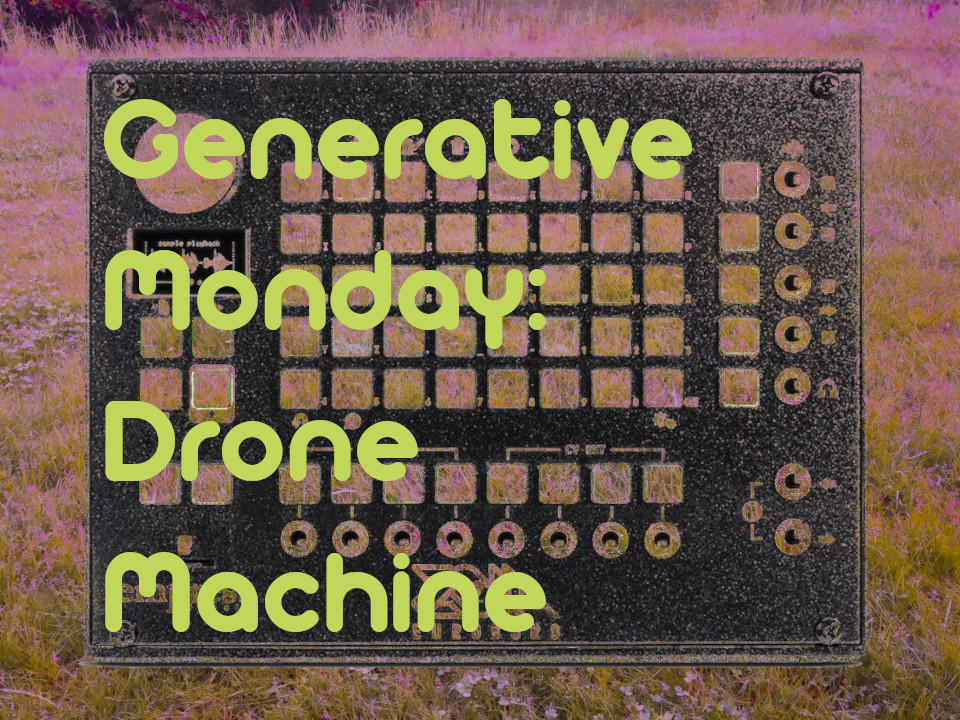 Drone Machine is the last patch I used for my recent generative album (https://christopherhmjacques.bandcamp.com/album/generative-sessions-volume-2-in-absentia) that I haven’t streamed yet. So, I can stream it and then publish it (and a few other patches I’m behind on getting out because they need a little organizational work), and I will have done my due diligence.

So, what is Drone Machine?

At its core, it’s two voices, each formed from a pair of ring-modulated sine waves. The oscillators also feed back into themselves, and their output is modulated by LFOs that all influence one another. The voices move between six sets of “tones” — I tuned everything by ear, so while some of the tones come close to chromatic notes, they were chosen more for their evocative capacity in themselves and in relation to the other tones, rather than a particular musical intent.

Each voice has a very, very slow cycling envelope (Robin Servant, if you are reading this — I used that method we talked about a while back where a slow clocked probability gate fed an ADSR — works pretty well), with a delay between each cycle. When both envelopes are low, the tones (can) switch. It doesn’t happen a lot. This whole patch is built around slowness. The drones drone. The snozzberries taste like snozzberries.

That’s the basic “voice” architecture. After that, it’s some distortion (home-brewed by using lots and lots of VCA gain) and filtering (modulated low-pass and non-modulated high-pass) and delays (in a SOMA Cosmos-style configuration) and (plate) reverb and pitch modulation (built around a Relabi wave) and AM modulation, etc. Stuff to make it sound both a bit cruddy and a bit airy. Smoggy?

So, that’s it. Except for the stuff I probably forgot!

christopher-h-m-jacques
6645 PM
Chat about this patch on Discord! Download (177)