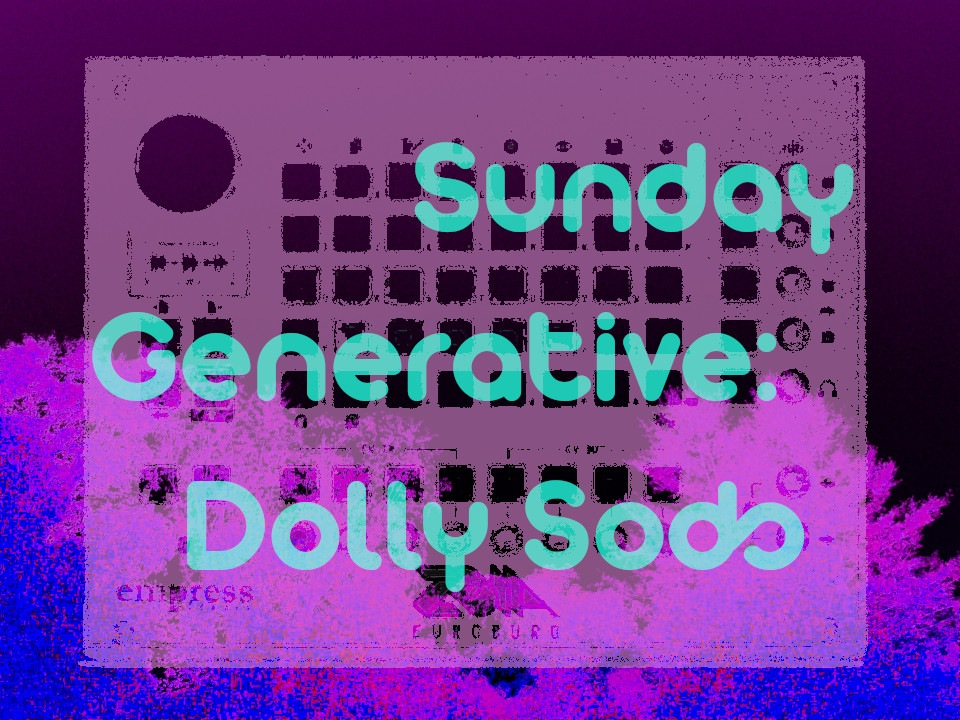 The synthesis for this patch is a single voice, lifted directly from my patch, Cheat Lake. I’ll quote from the patch notes to describe its methodology:

“he actual synthesis in this patch is a little novel, though: at its heart, the [voice] uses [a] pinged filter set-up. Been there, done that…. The voices draw from a F major pentatonic set of notes; one voice moves slower than the other, and the faster voice tries its best to harmonize in interesting intervals but fails with some frequency.

“The more interesting aspect is that I added a VCA after each filter, and this VCA is mixed between various amounts of openness (simply letting the pinged filters through) or controlled by a simple attack-decay envelope, which changes the sound of the pinged filter voice by suppressing the transient caused by the excitation. The degree to which the VCA is either open or controlled by the envelope is determined by a randomly shifting sine wave.”

I was going to mess around with the rate and key of the voice, to change things up -a little- but a funny thing happens when you listen to a patch long enough: even though you may have made some arbitrary decisions as you built the patch, they sound natural after enough familiarity. To the point where something else feels wrong. So, I left it exactly as it was.

(I’m preparing to put this material into an album, so I can rationalize the repetition further as a recursion in the scheme of that album. The same, but also different. First as tragedy, then as farce? Hopefully neither.)

Okay, so, where things go a little bonkers…. This voice then goes into three loopers — one pitched an octave down, one pitched an octave up, and one pitched the same as the input. The first two loopers play back in reverse. Each looper is tied to an LFO, but the LFO’s output is only sampled and sent to the record input of the looper when the synth voice triggers after silence (via an envelope follower and comparator; had to resort to analysis modules because the pinged filter’s envelope isn’t determined by CV).

The effect is cresendos of arpeggiating loops — little flits and flutters and echos. It’s quite good at taking a single voice and turning it into a much more complex signal. (If you like the sound, I’m working on a standalone patch to achieve the same sort of thing for live instrumentation.)

Then everything goes into filters (it took two low-pass filters to get the pitched-up material to sound right, i.e. not too bright and abrasive) and a plate reverb.

As for Dolly Sods…. so, I’ve started writing about this idea of Vandalia in the past few patch notes. This whole series is beginning to take shape as something I’m calling the Vandalia Project, which supposes an alternate history/reality for Appalachia and West Virginia specifically. These patches, I think of, as music from Vandalia. In those notes, I’ve mentioned a few times the influence of magical realism on my conception of the project.

Well, if there is a place of magic in West Virginia, it is Dolly Sods — a unique ecosystem in the US (apparently, there are some similar places in Canada) that sits high in the Allegheny mountains, straddling the Continental Divide. It’s hard to describe, so, just do me a favor and do a Google search (the pictures in the Wikipedia article are pretty good). It’s like stepping into an alien landscape or through a portal into some place where magic does feel possible. There are other places in Appalachia that evoke the fantastic, but it feels like they probably all emanate from Dolly Sods.

christopher-h-m-jacques
6882 PM
Chat about this patch on Discord! Download (55)