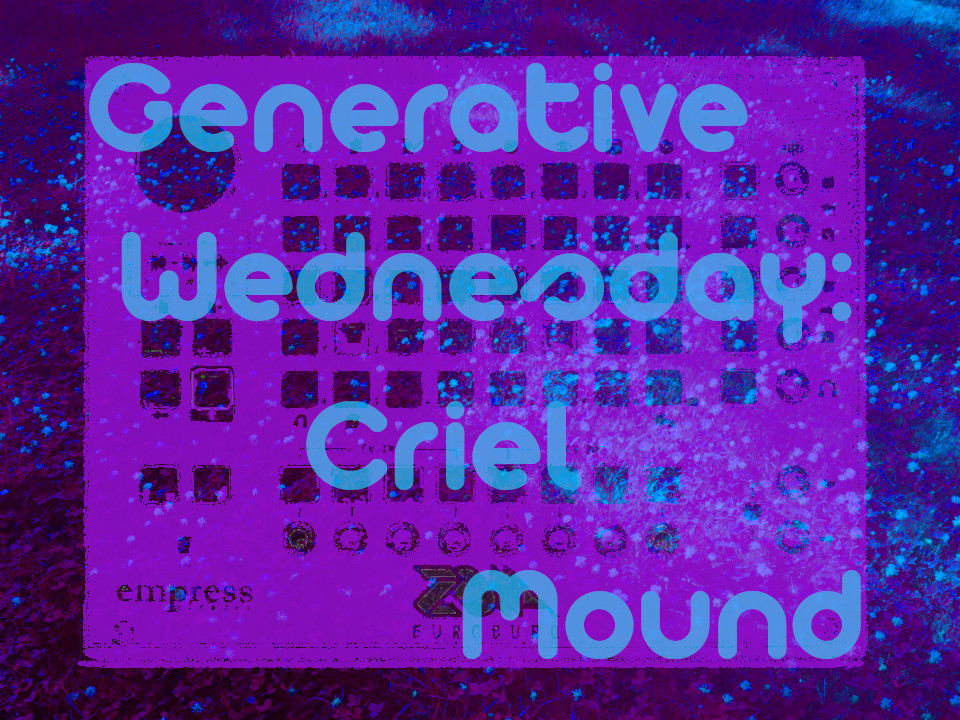 I’m going to begin these patches notes where I often end them, explaining the name of the patch.

The Criel Mound is a landmark in South Charleston, West Virginia. It is a burial mound, constructed sometime between 150 and 500 CE, by the Adena culture of indigenous Americans. Burial mounds like it used to cover western West Virginia. Many were leveled as European settlers moved into the valleys, as they stood on valuable flat lands in the alluvial plain of the Kanawha River, but the Criel Mound remains, along with a few scattered others.

The mound was excavated in the late 19th century. Within, the skeleton of a man standing well over six feet tall was found — gigantic for the time — with ten other skeletons arranged around it, as spokes of a wheel. Although we’ve recovered many artifacts from the Adena that allow us to piece together their material culture — ceramics and tools — the spiritual component of their culture is left entirely to speculation.

For a third of my life, I’ve lived within five miles of this ancient tomb. It’s such a common sight, driving along MacCorkle Avenue between Charleston and Dunbar that its strangeness disappears — my eyes know its shape, but my brain never really thinks of how it came to be. I eat in its shadow at least once a month, as some of my favorite restaurants are found in its shadow. Sometimes, I grab a banh mi from Yen’s Sandwiches — if you’re ever passing through the area and want a world-class banh mi, Yen’s Sandwiches in South Charleston — and hike to the top. It’s the centerpiece of a small park these days. And I’ll sit, eating a sandwich and looking out over the chemical plants that line the shore of the Kanawha now.

And I suppose I’m writing this for a few reasons. One is, if you haven’t noticed, I’ve been slowly diverting what meager audience I have for these generative livestreams to consider West Virginia — all of my recent patches have been named for places in West Virginia, and I’ve tried to write about how my experience as a West Virginian shapes how I approach things like… composing a generative patch. I might play this up some — making text what is more likely subtext, although that subtext undoubtedly exerts tremendous power over my imagination — but I think Appalachian representation matters. I’ve lived “abroad,” away from these hills, and when I tell people where I hail from, they already have some conception of what that means, one sensationalized by tales of poverty and ignorance and addiction (which have their root in fact, without question, but a place is not reducible to its most outlandish tales). It is also a place of great beauty, of kind and intelligent people, and a place deep with history.

And pre-history. The Adena possessed no writing; what they had to say is lost to time. But they are not. The Criel Mound speaks of them, as it looms, just at the end of D Street, a thumb in the eye of anyone who wants to act as though people of European extraction have any sort of inherent claim to the land. Once, it was theirs.

The patch itself is pretty simple. I based the underlying voice off of a preset for the Moog Model D app, called “Sky Runner.” It’s a simple thing, using all three oscillators, but the third oscillator is not tracked by the keyboard, droning on at middle C. The other two oscillators are spaced an octave apart, and an envelope with slow attack and decay is applied to both filter and amp. So, all of the above here. I didn’t want to expend the CPU to build a 4-pole filter, like the Model D uses, but I did run two low-pass filters in series to create a 2-pole filter.

Notes are selected from F3 to G4 — a fifth above and below middle C. I added some glide to the oscillators, and then set the glide to different speeds.

The output of this voice is fed to two loopers that trade off recording and playing back, each set to do so at an octave above and in reverse. The gliding oscillators against the droning one, both in the original audio and the looped audio, sound a little like pedal steel or dulcimer.

The loopers are modulated a little for some pitch vibrato, then passed into a slow-moving phaser to keep them interesting when they happen to record a short tidbit of sound and end up looping a few times in succession. Then they pass through a low-pass filter.

Everything goes into a high-pass filter, then the signal splits, going directly to the plate reverb at the output, but also heading to a granular module, feeding back on itself, with a slight (+20 cent) pitch increase to produce a subtle shimmer as the signal regenerates. (Then this goes to the reverb as well.)

It’s not the most complicated patch in terms of melody, but it does produce some very nice sounds: sometimes like pedal steel, other times choral in nature.

christopher-h-m-jacques
6651 PM
Chat about this patch on Discord! Download (53)