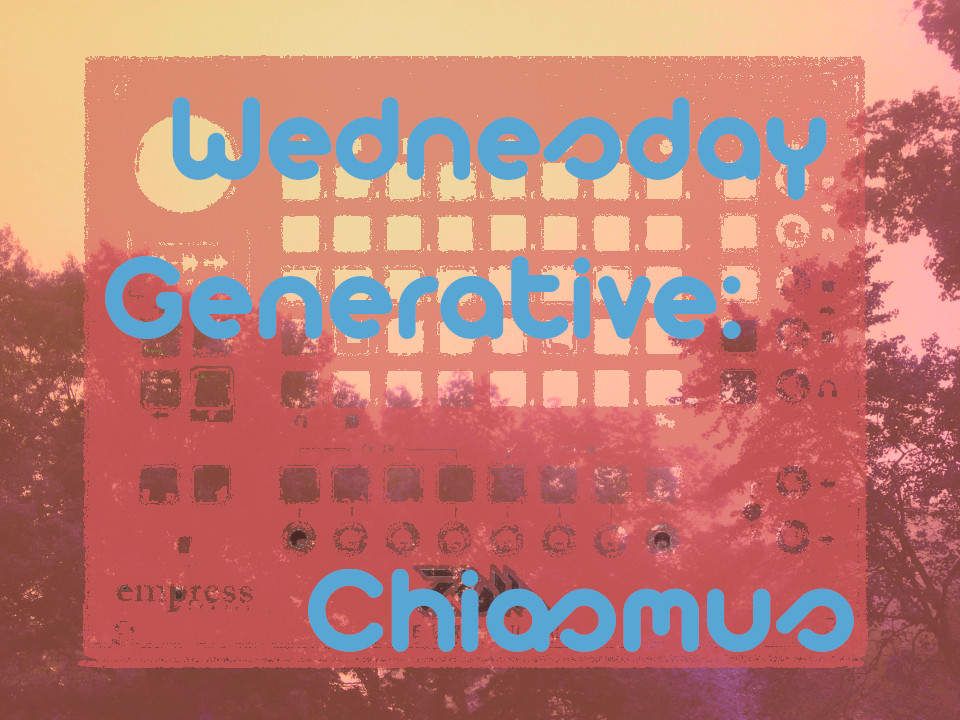 Sometimes, a method is in search of an application.

I would say that is where Chiasmus starts: I had been toying around with some randomized ratcheting, and I think, at first, a sort of drum-oriented approach would be the way to go. But I tested different drum sounds, and nothing felt right.

Ratcheting requires something transient-forward, so I finally thought about modal synthesis. The main melodic voice here is a modal voice composed of a sine wave exciter and three resonant bandpass filters, tuned to unity pitch, a fifth above, and then two octaves above. Each of the bandpasses’ resonances is modulated independently, so different emphases sort of ring out. The notes are selected by an 8-step shift register with a fairly wide range. Sometimes the register advances, sometimes it does not. The ratcheting ranges from 1 ratchet per step to 4, and the randomization is also multiplied by an LFO to give periods with more and fewer ratchets.

This voice is also fed into a VCA controlled by an attack decay envelope. The envelope shears off those transients, then the output of the VCA is delayed four beats, so its pitch complements the modal voice without replicating its frequency.

There is another, simpler voice, made from noise passing through a bandpass filter (which is also, I guess, a rudimentary form of modal synthesis). Like the first voice, its ratcheting is determined randomly, and again multiplied by the same LFO (so there is some coherence between when the two voices grow in intensity). Here, though, the ratcheting is both more and less intense: it ranges from 0 ratchets (a rest) to 20. The ratchet output triggers a sample and hold, which is derived from the same quantized random values that feed the first voices’ shift register; here, the notes are pitched up two octaves, which leads to little arpeggios and flourishes and chirps. The resonance of the filter is also randomized, so at lower resonance, it produces more drum-like sounds (snares and hats-ish, depending on the decay of the envelope, which is, you guessed it, randomized), and at higher resonances, more melodic elements, as the output becomes sine-like.

Now, here is where things get cool. (Bold claim.)

Then all of this is fed into two delays operating in stereo; one running at the base speed of the clock, the other running at 4/5ths speed. The output of the delays are cross-fed, so one goes into the others input and vice versa. This creates a very interesting ping-pong effect. Then, everything goes into a plate reverb.

As for the name, chiasmus is a rhetoric device of stating the same thing, in succession, but with different words. I don’t know as this quite achieves that, but I sort of thought the way that the looped material interacted with the regular voices felt kind of like that idea.

The video is just a quick collage I threw together from public domain sources. The star is a film called “Esso Stations at Night,” which is intercut with some other, fairly random scenes. A lot of them do feature cars, because this patch felt like movement and something I might listen to while driving at night.

Find the other stuff I do (music, patches, Patreon) here: https://linktr.ee/chmjacques

christopher-h-m-jacques
7669 PM
Chat about this patch on Discord! Download (166)