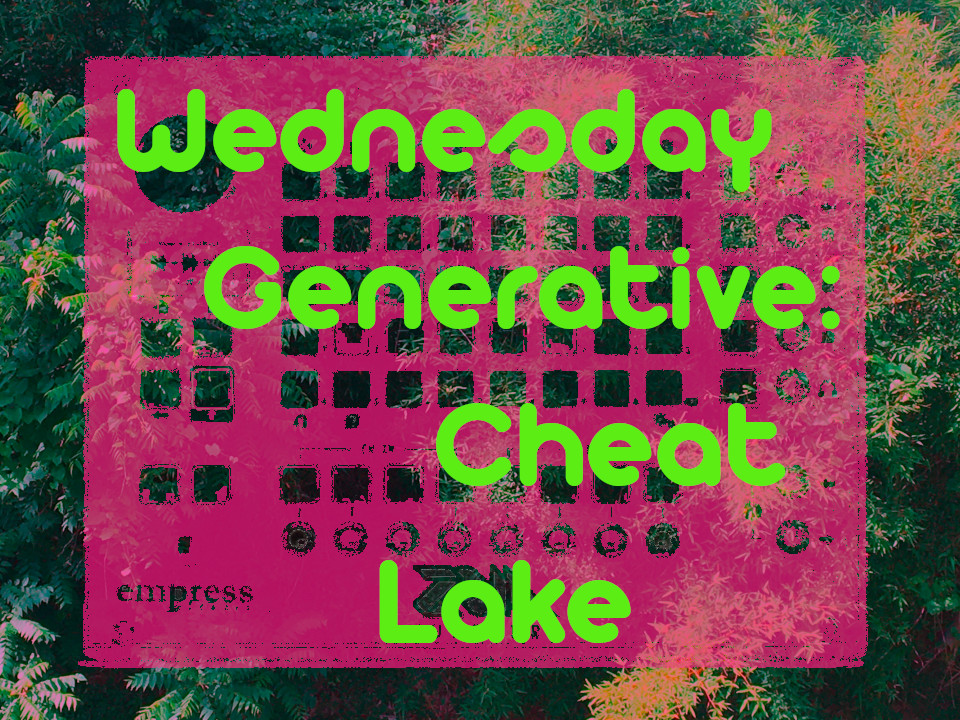 So, okay, some of this will sound familiar. Folks got to Somnambulist via the Sleepwalker patch and said, hey, more of this. So, while Cheat Lake isn’t just a simple re-tread, I did use some similar approaches (particularly the use of probabilistically recording loopers and a Cosmos-style delay). Sue me, it sounds nice.

The actual synthesis in this patch is a little novel, though: at its heart, the two voices uses pinged filter set-ups. Been there, done that. (To one, I added a ring modulator to produce an octave-up overtone, but this is hardly breaking now ground.) The voices draw from a F major pentatonic set of notes; one voice moves slower than the other, and the faster voice tries its best to harmonize in interesting intervals but fails with some frequency.

The more interesting aspect is that I added a VCA after each filter, and this VCA is mixed between various amounts of openness (simply letting the pinged filters through) or controlled by a simple attack-decay envelope, which changes the sound of the pinged filter voice by suppressing the transient caused by the excitation. The degree to which the VCA is either open or controlled by the envelope is determined by a randomly shifting sine wave.

The output of the voices goes into a low-pass filter and a high-pass filter before reaching a stereo spread and a hall reverb.

But it also goes into two loopers. Both record according to probabilities, so they’re a little unpredictable, although they draw from the clock used by the voices. One is pitched an octave up; one alternatives between an octave down, a fifth down, and unity pitch. Both are reversed. Both passed through an even more severe low-pass filter before they pass to the stereo spread.

But… all of the voices go to our old friend the SOMA Cosmos-style cross-fed delay.

In initial listenings, the patch got a bit washy, so I sent the output of the delay through a VCA, controlled by two LFOs, so sometimes it’s louder, sometimes it’s quieter.

And that’s the patch.

I’m continuing to name patches after places in West Virginia. Since it’s beginning to get summer-like, I decided to name it after Cheat Lake, which was my swimming hole of choice as a teenager living in Morgantown, West Virginia. The water’s still probably pretty frigid, but honestly, that probably wouldn’t have stopped me and my friends from driving out there and diving in this time of year. The patch reminded me not so much of the lake as it did lying in the sun, after swimming, and letting the trees rustle around us as the water evaporated from our skin. Maybe also the long car drives out to our preferred swimming spot (it was maybe a good hour to get there, once you accounted for the business of picking everyone up), which have a certain nostalgic glimmer these days.

christopher-h-m-jacques
6651 PM
Chat about this patch on Discord! Download (58)