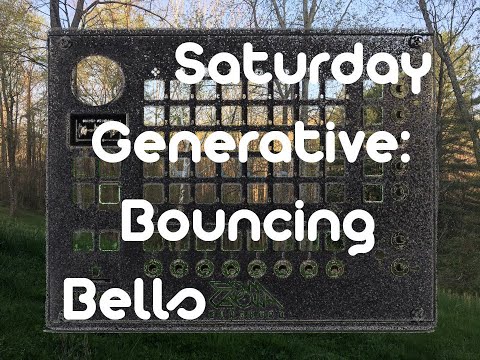 I’m not exactly sure this piece is “music.” I don’t mean it’s just a random assortment of sounds, but it is composed of three “bells” (made from an exciter — an FM’d sine wave and two resonant bandpass filters a piece; just above a lonely pinged filter, but adding that extra partial does make a lot of difference in the tone). Their pitches range over five octaves and are randomly generated, so while little melodious moments can and do emerge, the outcome is often a bit more tonal than musical.

So, let’s call it a tone poem.

The real genesis of this patch is the mechanism by which the bells are set ringing. Each one is triggered by a “bouncing ball” modulator. This is essentially a looped decay envelope that has its decay stage shortened each time it loops until it “hits the ground.” (The “ground” — just a head’s up, there are about to be a lot of “quotes” — is the decay length reaching a minimum. I tried 0, but it had a sort of zippery sound that, while interesting, I found also… annoying. So the “ground” level is randomly generated with each bouncing cycle.) The decay length is shorted by sending the output of the sample and hold which counts down the decay into a multiplier, then resampling the output of the multiplier. The “gravity” — the multiplicant in this case, or the amount the decay is shortened each loop — is also randomly generated, but an example of this would be a “gravity” of .5: A length of 6 seconds would become 3 seconds then 1.5 seconds then 750 milliseconds and so on. Also the “height” — the initial envelope length — is also randomly generated.

The effect is a bunch of plinks and bell sounds that sort of slide around each other as their triggering rate accelerates through the bounce cycle. As I said at the beginning, this leads to some interesting but ephemeral melodic interactions.

Each time the bounce cycle concludes, the bell voice picks a new pitch to ring out.

The voices are somewhat spread around the stereo field as they enter a stereo pair of high-pass filters to remove some low-end build-up. After the filters, the signal path splits three ways: the signal is sent directly to the hall reverb, it is also sent to a looper that records snippets of audio and plays them back in reverse (usually an octave below the original pitch, sometimes at the original pitch) and a kind of ping-pong delay. So, the audio enters one side or the other of this ping-pong delay through a pair of VCAs, modulated by a sine wave, with its speed randomly determined. The delays themselves are slightly skewed, with one longer than the other, so as the repeats ping and pong, they get a little jumbled up (this is a bit like how the Soma Cosmos works, albeit in a very simplified form). The output of the looper is then fed into the inputs of the delay lines as well. The output of the delay then goes to the hall reverb.

christopher-h-m-jacques
6645 PM
Chat about this patch on Discord! Download (129)