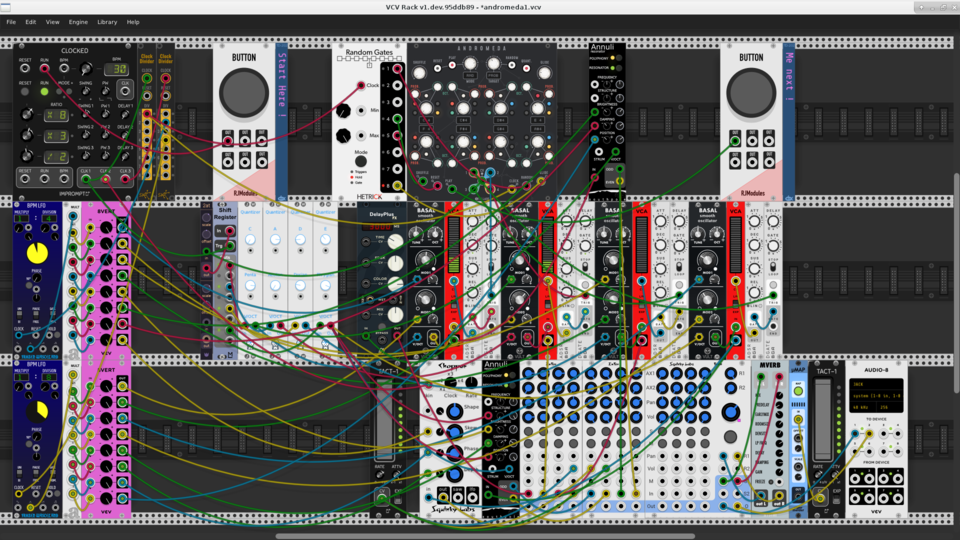 Stellare Modular had a sale.

In this patch their Andromeda sequencer powers four instances of the Basal “smooth oscillator”, appropriately modulated and mixed, of course. The sequencer is programmed with an 8-tone scale taken from Vincent Persichetti’s 20th Century Harmony, and the resulting sequences are processed by a bank of quantizers arranged in a simple diatonic modal relationship. After leaving the oscillators the audio is mixed, a little global reverb is added, and the music rolls on. Well, with some help from the pilot: The patch is a generative design, but its performance requires a timed intervention by the operator. After a satisfying introductory period featuring the plucked sounds the user needs to fade in the bowed instrument, then fade it out after another satisfying period, leaving the plucked sounds to themselves again. Incidentally, the recording fades out at its end, but I now prefer to simply stop the clock and let the delays fade.

Two output streams from the oscillators are routed to two Annuli resonators, each modulated by the BPM LFOs and the sequencer. The resonators are heard sparingly here. Their sounds are so remarkable, I made an effort to keep them from overpowering other more principal elements in the mix.

The usual players round out the group, with a special regard for the effects section. The Mverb module is deployed as usual, but the effects crew is joined by a delay line and a tremolo unit, each applied to a single channel/instrument.

This patch is the third part of a multi-section work exploring the possibilities of the Annuli module, aka Rings from Mutable Instruments, aka the Resonator module from the Audible Instruments plugin.

The players in the band:

My thanks to their developers for letting them come out to play. :)

This patch is dedicated to two Dans, both much beloved friends. To Dan Musgrave, RIP my old friend, may your journey continue into a blessed space. And to Dan Britsch, my fellow “struggler in the desert”, with deep thanks for his interest and support.

Dave_Phillips
612 PM
Chat about this patch on Discord! Download (92)