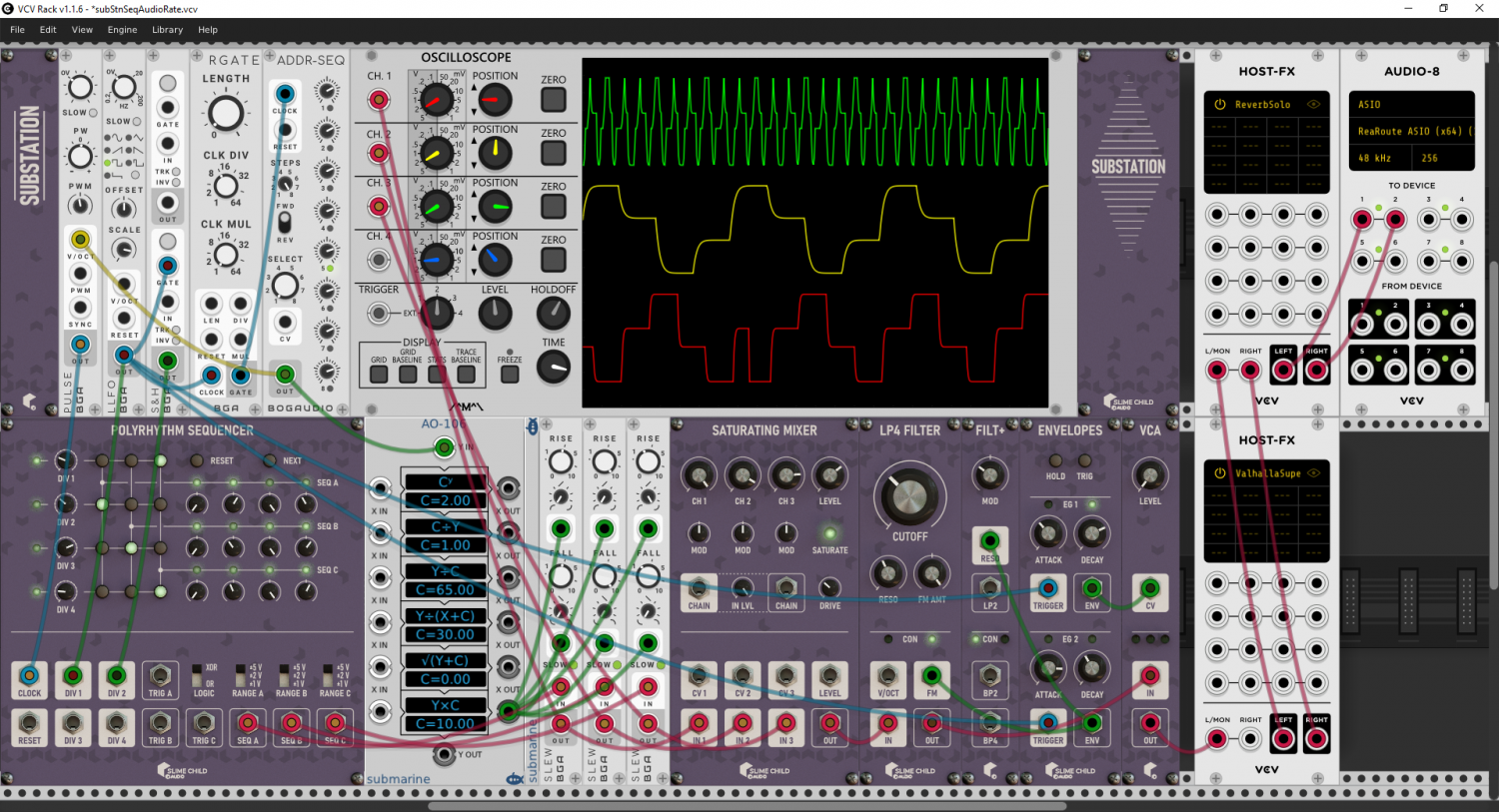 Here is a small patch that drives the Slime Child Polyrhythm Sequencer at audio rates, turning it into a 3 voice oscillator.

The sequencer is basically functioning similar to the SubStation Sub-Oscillator: The audio rate clock (Bogaudio PULSE module) plays the part of the primary VCO that establishes the root pitch, except it is never heard. The clock dividers coupled with the sequencers establish the sub-harmonic intervals and the the wave shapes (all squared off of course). So instead of 1 primary voice with 2 subs, the sequencer provides 3 subs.

Part of the interest is the ability to create complex “Frequencies” by combining multiple clock divisions. And the XOR option adds even more interest.

I add slew limiters with logarithmic and/or exponential rise/fall slopes to round off the squares a bit, eliminating some of the higher harmonics. The submarine AO-106 takes in the root V/Oct and computes the necessary CV to keep the slew rate proportional to the root wavelength, so the wave shapes can remain constant as the clock rate (silent root pitch) changes (disregarding all the modulation).

An LFO square wave at ~1.7 Hz servers a number of purposes:
– Triggers the envelope generators
– Modulates voice 3 (the green one) causing it to alternate between two harmonic sub intervals
– Triggers a sample and hold that randomly selects the interval of the lead red voice.
– A clock divider set at 12 triggers a Bogaudio ADDR-SEQ 8 step sequencer that controls the pitches fed into the polyrhythm sequencer clock. The sequence is tuned to D8, D8, E8, G8, A8, A8, E8, A8.

The 3rd yellow voice is fixed at a division of 12, effectively becoming the root of the resultant “chords”.

The last interesting bit is the patch takes advantage of the unusual behavior of the EGs – the attack phase always goes to completion, but the envelope can be retriggered at any time during the decay phase. I set the filter envelope to a long attack that spans 4 VCA envelope cycles, giving added shape to the “melody”. The envelope is positively applied to the cutoff, and negatively applied to the resonance.

Plus the following optional plugins:
Count Modula (for the oscilloscope showing all 3 voices)
VCV Host-FX (for delay/reverb) I used Valhalla SuperMassive, and Acon Digital Reverb Solo VST effects. But you can substitute the delay and reverb of your choice.

The demo video is from a performance at a weekly Virtual Open Mic (VOM) on Zoom. I added some additional midi controls and a transit module to facilitate quick button presses while I play my flutes. But they aren’t needed for the basic functionality.

I improvise along side the synth patch with Native American flutes, and then finish up with an epic vocal improv (I’ve never sung like that before in public – definitely gave me butterflies in the stomach leading up to that performance)

I believe the patch preserves the initial custom setting used for the Valhalla Supermassive. In case anyone is interested, here are the subsequent settings:

davevenom
629 PM
Chat about this patch on Discord! Download (95)