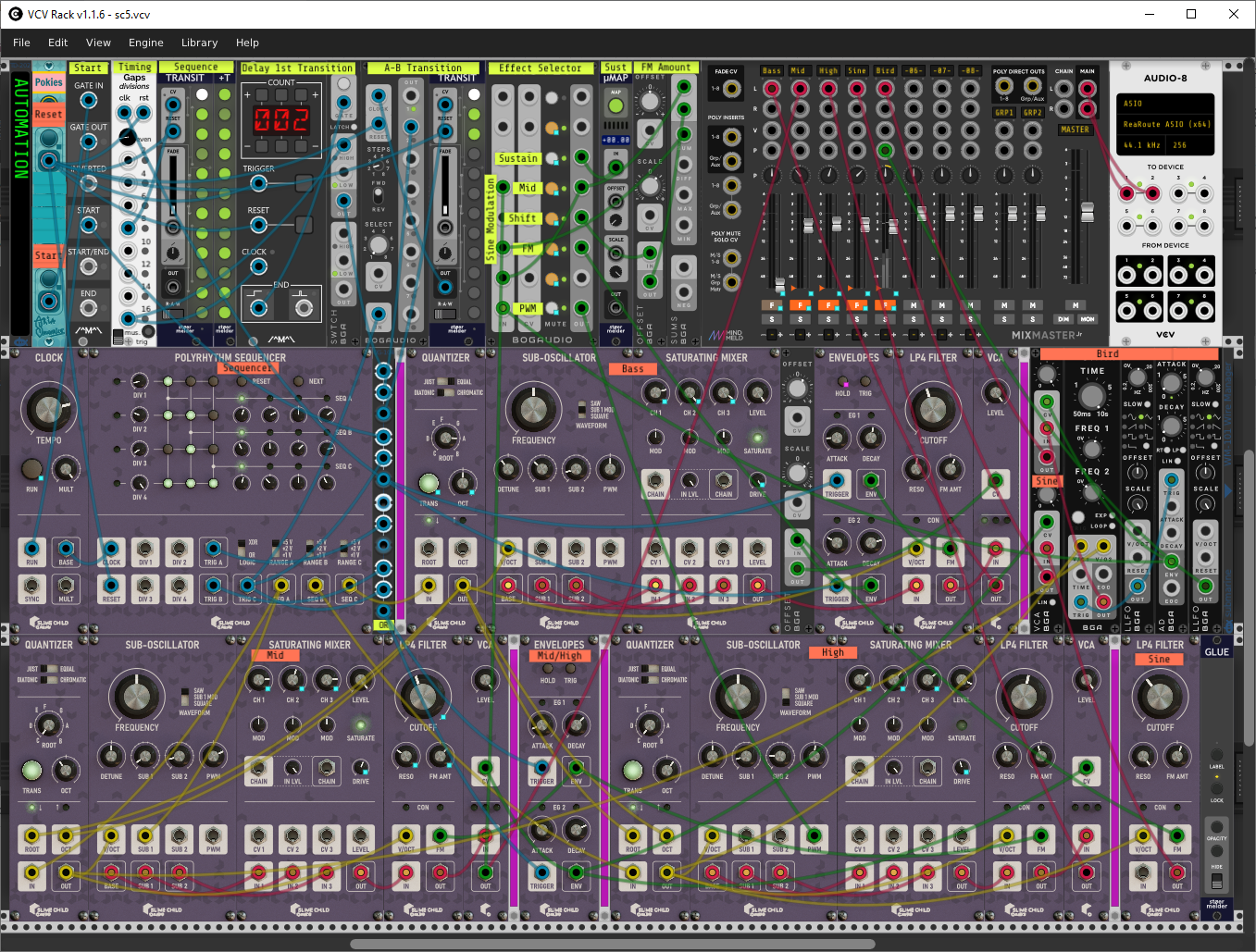 Here is a scripted synth jam featuring Slime Child Audio’s Substation plugin. It was intended for use as a backing track for a Native American flute improvisation, but the chord modulations are a bit tricky, and I haven’t gotten a good flute improv yet.

The patch is controlled by the two buttons in the upper left corner. To initiate the song, first make sure the Start button is off, then press Reset, and then press Start. The 9 1/2 minute jam is fully automated after that.

The video includes the ReverbSolo VST plugin from Acon Digital running in Host-FX. The patch available for download does not include the reverb.

Patch Notes:
Nearly the entire patch is built exclusively with Substation modules. The only exceptions for sound generation are a logic module to combine the sequencer triggers to drive the envelopes, an offset module to bias the bass line VCA so it never goes to 0, and a set of Bogaudio modules to generate the chirping birdlike voice. All other “alien” modules are used for “knob” twiddling automation, all sequenced by a Transit module.

There are a total of 5 voices:

The high voice is also doubled by a sine wave from a self oscillating low pass filter that uses the lower half of the Bogaudio VCA.

The modules in the top row perform all the automation, which is controlled by the master Transit module . The Transit is triggered every 8 bass pulses, but generally only every other step effects a change in the sound. The exceptions occur leading up to the climactic bass sustain moments, where there are 3 active steps in a row.

The Effect Selector (Bogaudio Mute8) has 3 buttons labeled for Sine Modulation (FM) that I ended up not using in the final cut. But they are functional – Unmute the FM button and then unmute either Mid(Mid voice audio) or Shift (constant voltage) to activate the Sine FM modulation.

When the Sustain button is unmuted, it activates the EG Hold button for the bass line.

davevenom
631 PM
Chat about this patch on Discord! Download (107)