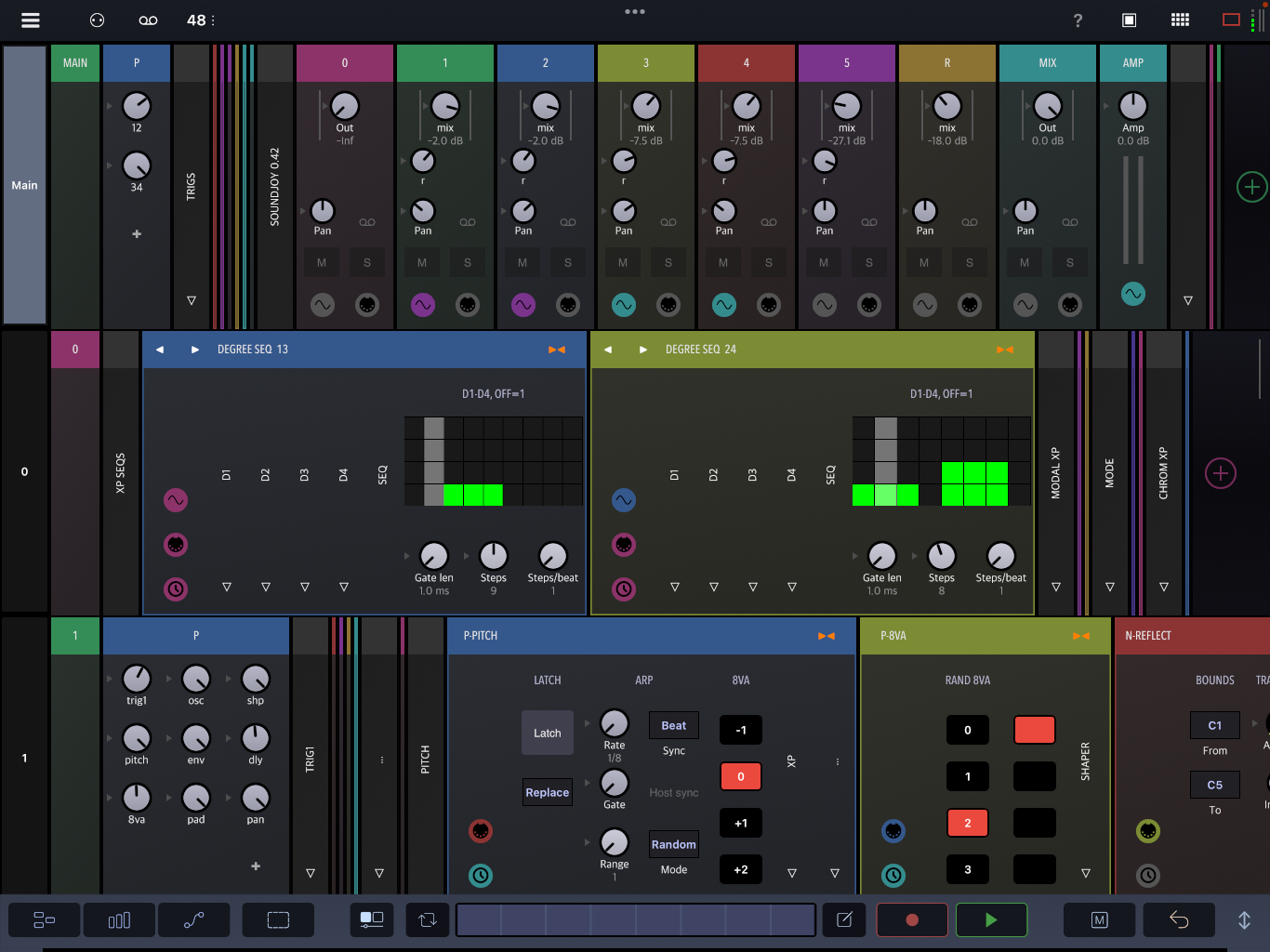 soundjoy is a probabilistic generative framework for Drambo.

soundjoy begins with a steady stream of trigger pulses sychronized to the host beat. based on a probability, soundjoy randomly selects some of these triggers to fire and generate a sound. when a sound is triggered, a set of secondary probilities are used to randomly change the sound quality in various ways: pitch, timbre, attack, decay, volume, pan, delay time & feedback, etc. so soundjoy generates sounds at random beat sync’d times, & each sound can change in many ways, according to probabilities.

– soundjoy uses sustained chords from a track’s midi input to select the range of random pitches.

– sequenced global modal transposition: a new track 0 has global controls to transpose the 4 tonal tracks, both chromatically and modally. it includes 2 simple slow sequencers to quickly vary the modal transposition over time. details in soundjoy-quickref.html.

– deleted unused racks and modules. soundjoy is approaching the Drambo event horizon! it has become so complex that i’ve managed to make projects that won’t load! the solution is to remove any bits not being used in the demo, except for the now prototypical track 1. in particular, the super-complex ‘delta time’ dtdelay racks have been removed from the droney tracks 3 & 4 where they are superfluous.

– new graphic shapers for oscillator velocity and delay feedback, which can bias the range of random values. new 8va shaper uses a random sequence to vary proportion of random 8va’s.

– new percussion track 5: uses stripped down p-trig1 & p-pitch racks to randomly drive Klevgrand
s Skaka & Borsta. by default soundjoy uses a flexi loop @48bpm created by this system, so Skaka/Borsta are not required. presets for Skaka/Borsta included if anyone needs to change the tempo of the demo.

– n-scale: new sub-rack in p-osc to limits oscillator volume based on pitch.

– when not playing, midi input on the generator tracks now generates pitched triggers by default. the thru option in p-trig1 can be turned off if this is not desired.

– p-pitch, p-8va and n-reflect racks now operate on midi data, which are converted to analog pitch values just before p-osc.

– new eq & compressor modules after p-amp to tailor the audio before fx.

– added optional quantovox Spatializer au fx at end of each generator track. this adds a subtle space to soundjoy which makes longform, generative audio less fatiguing imo. it fails harmlessly if Spatializer is not present. and there’s a button at the end of the main track which toggles all instances on/off for comparison.

– doc updates. now with *pictures!* open soundjoy-quickref.html in a browser. screenshots and text for most of the new bits and some of the old too. still more docs to do tho. is this actually useful to anyone?