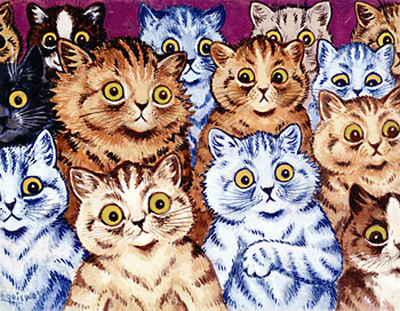 4 Over Dub enabled Loopers whose pitch is control by the Expression Pedal.

The last pitch setting is held… so you can tune your loops and get some that are 25% (1/4) and others all the way up to 200% (double Speed) and anywhere in between those ranges. The Pitch control using the Expression Pedal is Slew Limited to keep it from jump around but not so much that you can’t drive your looped sounds Pitch like punching the gas or breaking when driving your car.

The 0 page is a set of guide lights and controls if you don’t want to use foot switches. If you want to use the Stomp Switches they are enabled…

Left Stomp:
Cycles the controls between the loopers 1-2-3-4 then back to 1. This includes the Expression Pedal, and the Middle Stomp (Record) and the Left Stomp (Loop Fade In / Fade Out).

Middle Stomp:
Record trigger (momentary) press and hold to record your initial loop the loop length is set based on how long you hold the Middle Stomp down… unless you hold it longer than the allotted 16 seconds. After you Release the the Middle Stomp you are in Latched Over Dub which continuously grab audio signals off the Audio Inputs and add them to the existing loop. The Loop remains at it’s current length but new sounds are loaded in like a delay with the feedback cranked to 11.

Right Stomp:
The Loops in this patch do not make any sound in their default state… You need to press the Right Stomp to Fade In the looper audio… the Blue/Green buttons indicate which loopers are Faded In (Green) or Faded Out (Blue) pressing the a Green or Blue button will reverse the current state… as will a Tap on the Right Stomp Switch.

The 0 Control Page:
4 Red Record momentary buttons on the stacked top to bottom on the far left.

4 Blue flashing indicator pixels that tell you which Looper row is currently active with the Stomp Switch and Expression Pedal controls. The row that’s flashing is the Row that’s Active.

4 Magenta Reverse Buttons these will Reverse the Playback of the Looper.

4 Aqua 1/2 Speed Pitch Dividers. Press these to get Slow.

4 Green Expression Pedal intensity indicator pixels one for each Looper. These get brighter the harder you press the gas.

4 Yellow Reset Buttons one for each Looper… If you don’t like what you got press the reset… and that Looper is Reset ready Latch in some new audio.

1 Red Reset All “PANIC” Button… in the bottom right corner. Don’t Panic there’s a Button that can do it for you.

When using the Stomp Switch controls they are only active for the Looper layer that is indicated by the flashing Blue Light… When using the buttons you can pretty much do anything at any time.

insektgod
65 PM
Chat about this patch on Discord! Download (121)