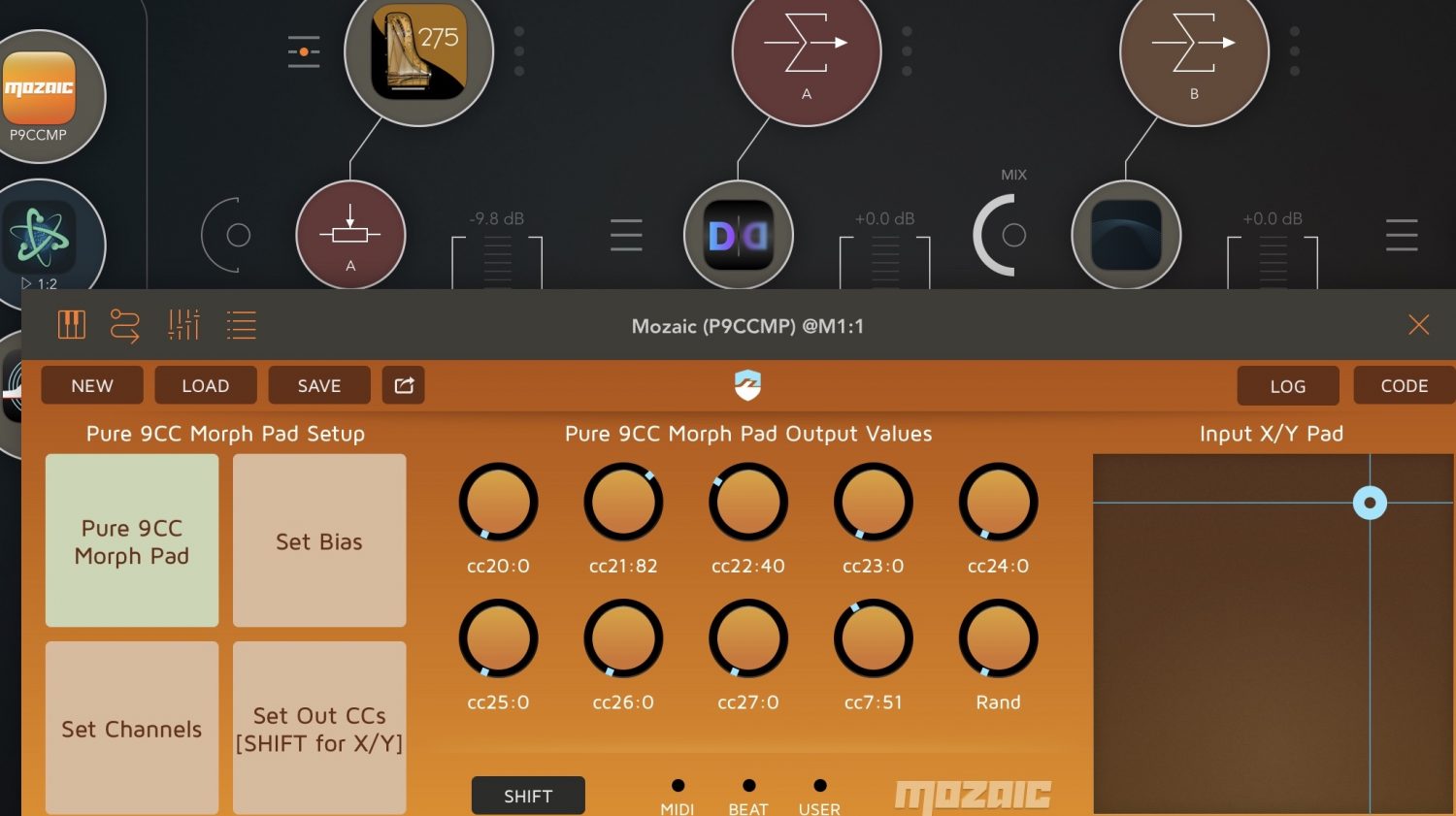 Are you fascinated with the morph pad in the Pure Piano app?
Would you like to create a customized morphing pad, sending your own instruments to be morphed by your own effect chains?

The Pure 9CC Morph Pad Mozaic script allows you to do all that – and more!!

Morphing 9 CCs From the X/Y Pad

When you first load the Mozaic script you see that the ‘Pure 9CC Morph Pad’ key is highlighted in green.
This means that the ‘Input X/Y Pad’ is active and sending out values to the 9 controllers.
Move the target cross on the X/Y pad.
You see the knobs under ‘Output Values’ change their value between 0 and 127, depending on where you move.
The knob labels show both, the CC number and the value sent.

The first 8 knobs correspond to the locations on the outer rim of the X/Y pad, starting at E and moving counterclockwise, returning back via SE.
The 9th knob corresponds to the center (Ctr) location of the X/Y pad.
The 10th knob is used for fun with randomization.

When you are in morphing mode, turning the knobs will not effect any change or send any message – this can only be done through manipulating the X/Y pad.
However, there is one exception: the Randomize (Rand) knob – turn this knob past 12’o clock to randomize the assignments between knobs (i.e. ‘hotspots’) and the channels & CC numbers they send out.

Setting Up the Morph Pad

Use the three additional pad keys and the SHIFT button to enter different setup modes for the Morph Pad.
When you are in the setup modes, you typically see the knobs labelled with E, NE, …, SE, Ctr, and Glo.
This tells you which of the ‘hotspots’ on the X/Y Pad corresponds to each knob.
The knob labeled ‘Glo’ – for Global – allows you to make a global change to all of controllers.

Once you are done with setup, tap on ‘Pure 9CC Morph Pad’ to return to active morphing via the X/Y pad.

Of note: when you re-load the same Mozaic script instance, the X/Y Pad will be centered
and the corresponding values – which are 127 for the ‘Ctr’, and 0 for ‘E’ through ‘SE’ – will be sent to the controllers.
However, changes made in the setup screens or via the ‘Rand’ button will be preserved.

Next we will look at the different setup features.

The ‘Set Bias’ key enters the bias setup for the controller values.

Morphing via the X/Y pad is divying up 127 ‘points’ between ‘hotspots’, awarding
them to 1, 2, or 3 of the 9 available controllers.
In a linear bias – which corresponds to a setting of 1 – these awarded ‘points’ from the
controllers will add up exactly to 127.
Reducing the bias of a controller by moving it towards 0 will ‘bulge up’ its
response curve, so that the actual contoller value is increased upward from the points awarded.
In the extreme, when the bias is set to 0, the controller value will almost immediately jump to
127 when an input signal is received.

The ‘Set Bias’ mode allows you to move individual controller knobs to set their bias to taste.
Or, you can use the ‘Glo’ knob to change the bias for all controllers at the same time.
The script uses an initial bias setting of 0.7 which pushes up controller settings somewhat
from the linear case.

The ‘Set Channels’ key allows setting up different channels for each of the 9 controllers.

The ‘Set Out CCs’ key allows setting up the controller numbers for the 9 controllers.

The script initially sets the controllers for E,NE,…,SE to cc20,…,cc27 respectively,
and the ‘Center’ controller is set to cc7.
Use this screen to assign individual controller numbers as desired.

The global knob ‘Glo’ allows you to set successive controller numbers for all 9 controllers.
Except, if you have set the 9 channels for your controllers to be all different (see ‘Set Channels’),
then the ‘Glo’ knob will always assign the same controller cc number to all of your controllers!

Tap on the [SHIFT] button to get to the ‘Set CCs for X/Y Input’ setup.

Of note: the parameters ‘XYPad X’ and ‘XYPad Y’ are also exposed on Mozaic in AUM.
Thus, an alternative way of setting up external control would be by
using AUM ‘Midi Control’ directly to manipulate these parameter values.
In this case you will want to bypass this setup altogether.

By default, any Midi message received by the script that does not match the ccX or ccY seetings above
is passed through. This behavior allows you to splice this script into your Midi effects message flow.
This is controlled by an additional option:
* Thru – optionally turn off pass-through of other messages. Only pass signals generated from script.

Finally, this screen lets you set up the behavior of the ‘Rand’ button on ‘Pure 9CC Morph Pad’.
* RndCtr – select whether the center (Ctr) hotspot should be randomized or not
* Rand – select amount of randomization (off, or 1..16). Turn all the way left to disable randomization.
When the script is first initialized, the ‘Ctr’ hotspot will not be included in randomization
and randomization is set to 8 rounds of flips.

The ZIP file contains this readme, the Mozaic script

ipadPure9CCMorphPad (rozeta, atom 2, ravenscroft 275, yaled, eos, discord4, filterstation 2, tb equalizer, saturn 2, thafknar, wood’n gate, tb barricade)
– a quick-and-dirty attempt to provide similar characteristics to the Pure Piano morph pad
(If you have all the referenced Apps you know that you are an App hoarder!)

tonestackPure9CCMorphPad (kern midi lfo, atom 2, ToneStack PRO)
– for the fun of it, a version with ToneStack-only effects, now that it is available as AUv3!

Now, can you come up with apps and settings that do provide an emulation of the morph pad in Pure Piano?
Can you produce better / bigger / wilder/ more fun / more useful morph pads than the one in P.P.?

But – this is just ONE way to use the script – there are a myriad other avenues to explore!
* use the controllers to select between different instruments (e.g. via volume control)
* use the controllers for messing with different settings on the same instrument
** remember the flexibility of AUM ‘Midi Control’: even though the controllers values
sent by the script ‘rest’ at 0 and the go up to 127, you can assign a particular starting point
and the subsequent value increase or decrease in the AUM mapping.
* use multiple instances of the script and control each of them from a pair of physical knobs
on an external keyboard.