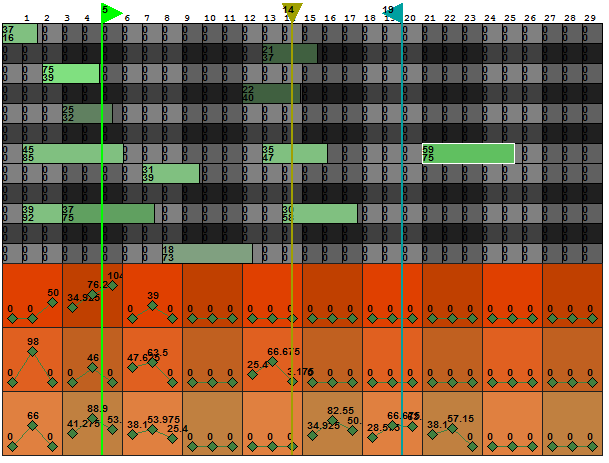 A piano-roll styled editor for polyphonic sequences done in pd-vanilla with struct.

Supports:
Polyphonic notes, velocity, length.
Uncapped amount of automation tracks (use a vline on output to transition smoothly, or use upper automation track to control vline…) to control any parameter you want, standard midi values from 0 to 127, supports commas. Control cutoff etc.
Basenote, a number that is included in sequencer meta, to raise the notes to a base value.
Divisions — separate sequencer also registers them.
Variable loop start-end and manually movable playhead.
Stop and pause.
Save to (text)file and quicksave after load or after initial save.
Can play notes on click.

Editor is mostly meant for editing, but it has sequencer also, just need to send a metro in it.
Sequences can be saved in a file and can be played with included lightweight sequencer.

There is no cap on length or automation tracks, but very long sequences can be slow to load to graphics.

taavi-viikman
90 PM
Chat about this patch on Discord! Download (203)