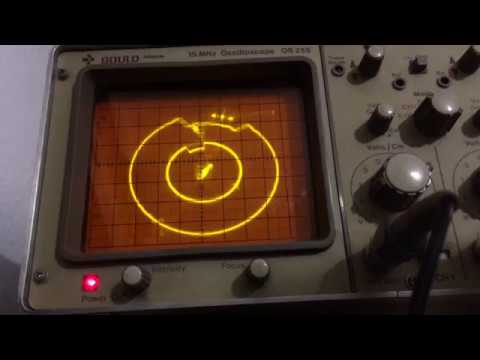 A polar breakout-like game that is played by viewing the Audio output on a Vectorscope/Oscilloscope.

Plonat Atek is a digital game that communicates itself to the player only via the stereo headphone
jack. The signal is split, and one of the streams is fed into a pair of headphones that show the game
to the player as a melody, interlaced with a series of blips and bursts of noise. The other stream
leads into an oscilloscope, that visualises the two channels by moving a dot across the screen in
correspondence to the signal. On the screen, the game manifests as a ball bouncing around in a
circular version of Breakout.

Both the oscilloscope and the speakers are analog devices that interpret the signal and generate a
representation of the game. The representations are based on interrelated properties of the same
signal. Thus, the relationship between the audio and visual components is not merely designed,
rather the two emerge from identical information: In Plonat Atek, the sound is designed to be seen
and the visuals are designed to be heard. For example the blip heard when the ball bounces is the
distortion seen in the same moment, and the noise heard when the ball is lost is visible as a glitch
on the oscilloscope.

There is also a .wav file for those who cannot or don’t want to run PureData but want to check if that sound-is-image thing is really true :P

You will also either need a real Oscilloscope (in which case I would loooove a video of yours!) or an emulator, like these two: