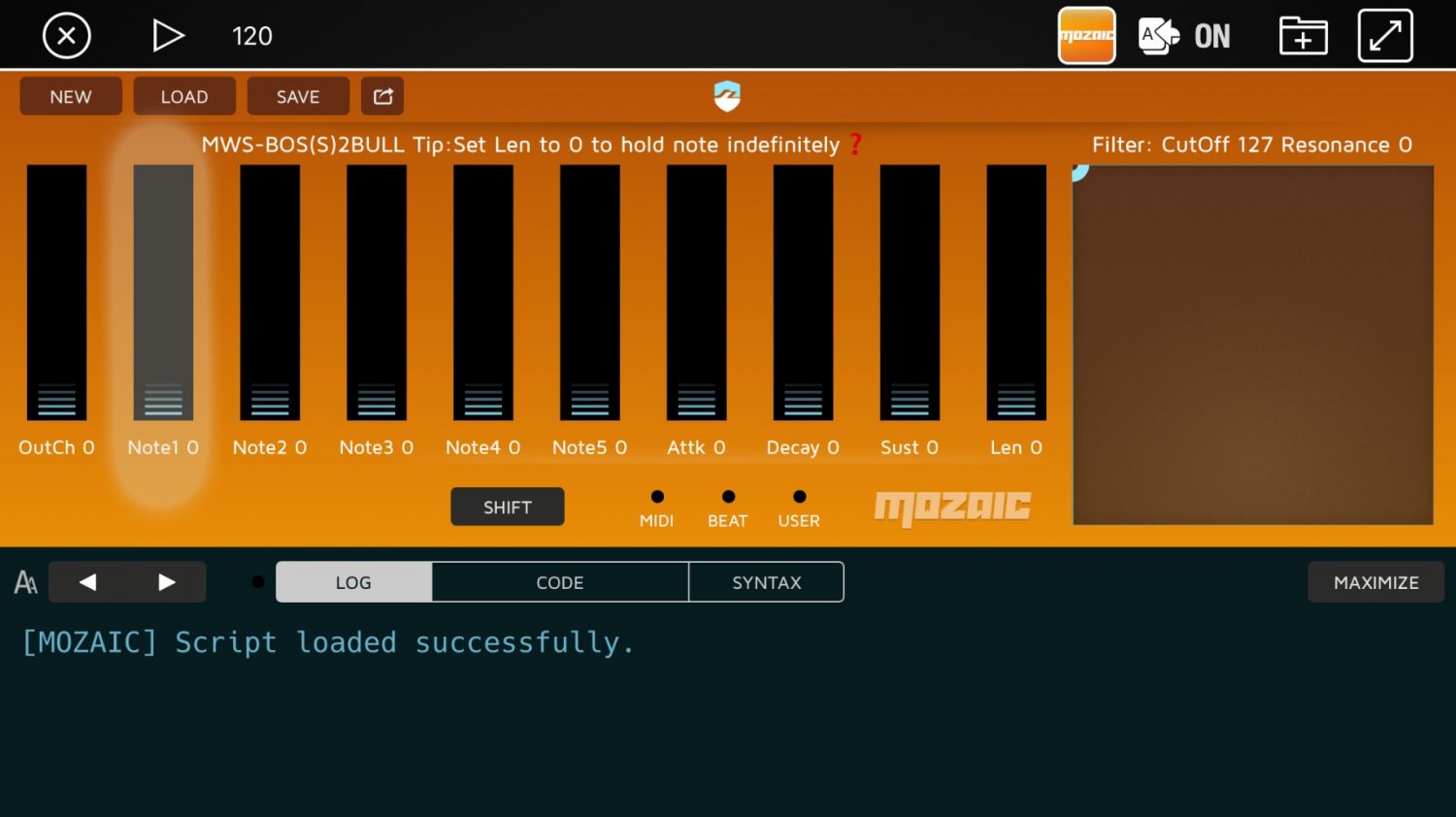 A script to convert a Boss FC-50 MIDI foot controller into a passable set of monophonic MIDI bass pedals to control the bass synth of your choice (possibly a Moog Taurus emulator).

The Boss FC-50 has 6 pedals which only send Program Change messages when pressed. A typical set of bass pedals, such as the Moog Taurus Mk1, has 13 arranged as a C-to-C piano keyboard which control a monophonic synth. MIDI bass pedals exist but I cannot afford a set at the moment so I have used the excellent Mozaic Plug-in Engine to repurpose my FC-50 to function as a sort of controller which is a necessary compromise over the real thing but offers potential advantages too when I can work out how to script them.

This is what the script does:
– [ ] Converts PC message into Note On message and sends it.
– [ ] The Note On is sent on the channel it was received on or can be re-channelised to match outboard gear etc.
– [ ] Any other channel messages are passed through* unchanged unless they have been re-channeled.
– [ ] On the next PC it receives it ends the previous note, if necessary, and starts the new one.
– [ ] The length of a note can be set to a specific numbers of seconds, a number of beats (when synced to a host clock) or to play indefinitely.
– [ ] The leftmost pedal plays the root note (default:C) which can be transposed by an octave.
– [ ] The next 4 pedals can be set to play notes relevant to the scale or chord structure of the piece you are playing. Increments in semitones relative to the root.
– [ ] The rightmost pedal plays the last played note up an octave and makes the other pedals play in the new octave. The next press brings the octave back down in the same manner.
– [ ] There are five controls provided that can affect the synth you are using:
– [ ] The X-Y pad sends CC74 and CC71 messages which you can use to control the cut-off frequency and resonance of the filter.
– [ ] The Attk, Decay and Sust faders send out CC72, CC73, CC75 respectively which can be used to manipulate the filter envelope.
– [ ] Finally, how do you stop that indefinitely held note? Well the FC-50 has a Sustain Pedal input so if you have a foot switch hanging around you can use that* to stop the note, if not you can press the Shift button.

Well there you have it. Somewhat niche I admit but it demonstrates the beauty and usefulness of Mozaic. Now instead of waiting, probably for ever, for somebody to come up with a utility that probably only you will use, you can fairly simply write your own. In the unlikely event that this is the only script I write, Mozaic is worth every penny to me. Thank you so much Bram Bos.

mikewillstew
53 PM
Chat about this patch on Discord! Download (20)