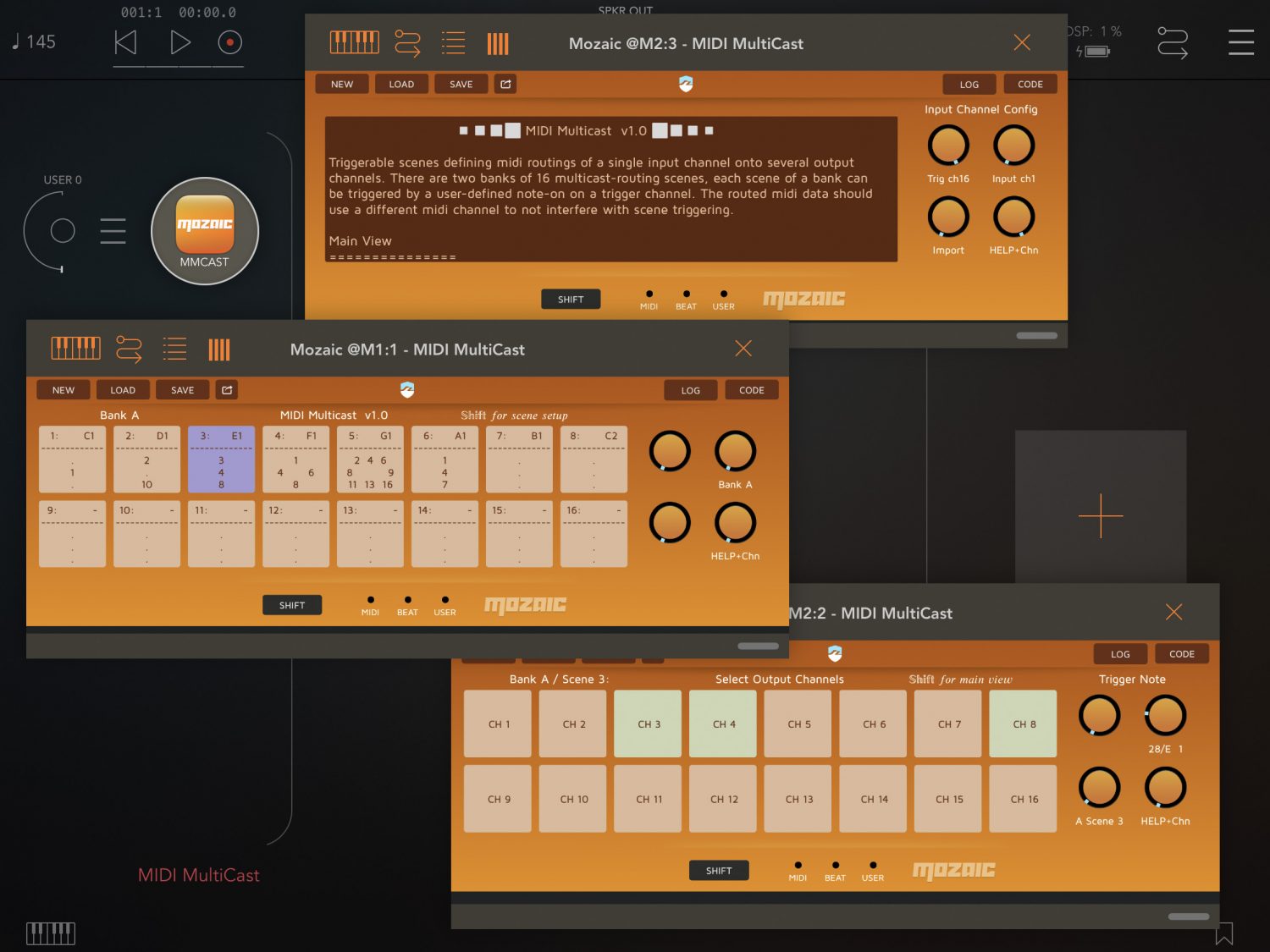 Triggerable scenes defining midi routings of a single input channel onto several output
channels. There are two banks of 16 multicast-routing scenes, each scene of a bank can
be triggered by a user-defined note-on on a trigger channel. The routed midi data should
use a different midi channel to not interfere with scene triggering.

Config View
===============
* The 16 pads toggle the output channels for the current scene. Selected pads/channels
use a light green color.
* The trigger note knob shows and configures the scene trigger. LEARN (full left) sets
the next note received on the trigger channel as trigger note. (Double-tap for LEARN)
* The SCENE knob allows to switch to other scenes and banks for faster configuration.
The banks use a minor different ‘unselected’ pad color scheme to highlight bank
changes.(Double-tap knob to change to next scene)
* The HELP+Chn knob toggles to Help+Input Channel View . (Double-tap is supported)
* Tap SHIFT to return to Main view

While in Config View, the current multicast configuration is applied to allow testing
with notes on the input channel. If a channel is muted while input notes ar held,
Note-Offs for the active notes of this channel are send. The script does not change
scenes on trigger notes while in config view.

HELP + Input Channel Config
===========================
* Shows this description
* The TRIG_CH knob sets the trigger note channel
* The INPUT_CH knob sets the input channel to be multicasted
* The IMPORT knob allows to import settings from an older MIDI MultiCast script version
to update the script without having to manually re-apply previous settings.
(Double-tap is supported)
—— Before updating the script, save the to-be-preseved settings into a preset.
—— Update the script, double-tap HELP, double-tap IMPORT
—— Open another Mozaic instance and there load the preset containing the settings
to be imported while the updated script waits for data
—– There is a timeout of 10 seconds to load the second instance or import will fail
* The HELP+Chn knob toggles back to the previous view. (Double-tap is supported)
* SHIFT also returns to the previous view

Bank Switching
===============
The bank switch can be automated using AU parameter user0 or a program change message
on the trigger channel. Switching banks switches the trigger note configuration, but
does not switch active scene. The old scene (in the old bank) is active until a new
scene is selected by pressing a pad or using a trigger note.

* To finish, tab SHIFT to return to Main View

Extras
===============
* Each input note will send its note-off to the channel combination used for the note-on.
This allows sustained input notes even during scene/bank switching
* All midi events of the input channel excluding sysex messages are multicast
* The script applies double note-on/note-off protection for the routed midi
* The first 8 pads default to Rozeta pattern change notes as trigger