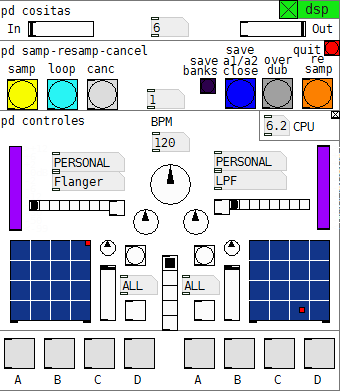 The MEH-SYSTEM (“Electro-Human Music System”) is some kind of emulation of Kaoss Pad 3 and a Boss LoopStation. Created with Pd-Extended.

Look at this videos: in stage, within a comedy spectacle and at home, showing how it works.

Controlled by TouchOSC interface, on Android ( “meh_system5.touchosc” interface included in ZIP) (sorry Hexler, I didn’t paid for it).

Mic in: has EQ3 (for using different types of mics) and LIMITER.

Recording modes:
SAMPLE: it uses predefined BPM to record in 1, 2, 4, 8 and 16 beats, using Mic as input.
RESAMPLE: same as SAMPLE, but it uses everything (FX, Mic and Banks) as input.
“LOOPING”: uses the Boss LooperStation recording Style. To use this mode, no bank must be playing. Clicking (or tapping) the button, it starts recording. Clicking again, it stops recording and starts playing. Taking the amount of beats, MEH-SYSTEM defines the new BPM.
OVERDUB: while, at least, one bank is playing, it start recording in the same bank “overdubbing”. Also, it can be activated as Stop button using “LOOPING” mode. (it uses ipoke2~, compiled for Linux64).

First 2 Banks: have LIMITER (every bank can has it, it’s like this for optimization, I only need those)

Output: has LIMITER and EQ7 (actually, I don’t use the EQ).

MEH-SYSTEM uses original or modified abstracts from: DIY2 FXs (by Matt Davey, I love him), eq7.mmb~ (by Maelstorm), CMETRONOME (I think by Chris Edward, posted by screwtop), RJDJ-vocoder, VLFO (by don’t know who), and don’t remember others…