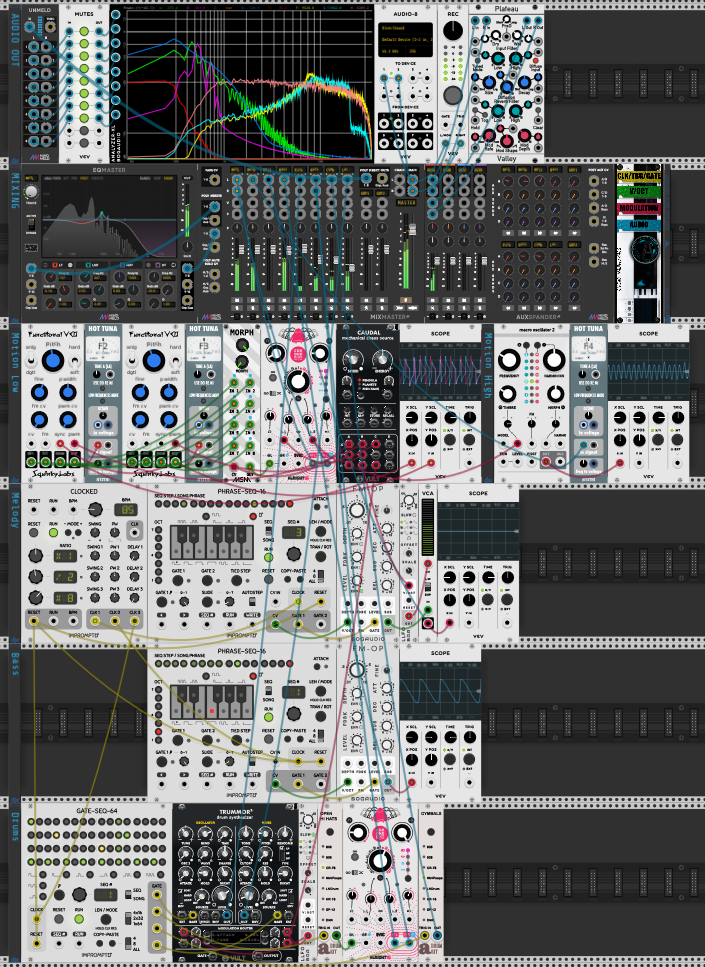 Motion:
– Functional VCO (Squinky Labs)
– Morph (MSM)
– BLOB (Alright Devices)
– Caudal (Vult)
– Macro Oscillator 2 (Audible Instruments)
For the motion melody I used 2 VCOs with different pitch. Morph is modulated by Cadual and is morphing between the VCO output signals. I also added macro oscillator for a little variation in the motion noises. Blob is just for making it sound some more interesting.

Melody:
– Clocked (Imprompt)
– Phase Seqencer (Imprompt)
– FM-OP (Bogaudio)
– LLFO (Bogaudio)
– VCA (Fundamental VCV)
The melody is played by phase sequencer, triggered by a slow clock. I used more or less equal sequences with a small variation in melody and pitch and a 3d one, simply to force a break. The voice is generated by FM-Operator with a long release time, so you have a slow fadeout, if the last note of the sequencer is played. The modulated VCA is just for a little variation in volume.

Bass:
For the bass I simply used another short sequence with a really low pitch.

Drums:
– Open Hihats (Autodafe)
– Cymbals (Autodafe)
– Trummor (Vult)
– Gate Sequencer (Imprompt)
The drums are clocked by gate sequencer. I used left side of trummor to make a kick and the right side for the locomotive noise. In the video I forgot to turn up the modulation knobs for variation of the locomotive noise. I added it in the download. :)
Blob is used in combination with the hihats to have some more stereo effect in the path. I already used it for the motion sound, but you can’t hear the effect very well. The cymbals are supporting the hihats with a random additional beat.

Mixing:
– Mixmaster (Mind Meld)
– EQ Master (Mind Meld)
– Plateau (Valley)
Usually my audio recordings are very silent, so I practised a little more with the Mind Meld tools and tried to keep the output audio just bellow zero. I’m using plateau to make the audio signal sound more atmospheric, but it raises the volume too high with a risc of clipping if you turn the effect all the way up.

I don’t like the sound of the end result yet. It sounds kind of dull and shrill. I need more practise, hehe. :D