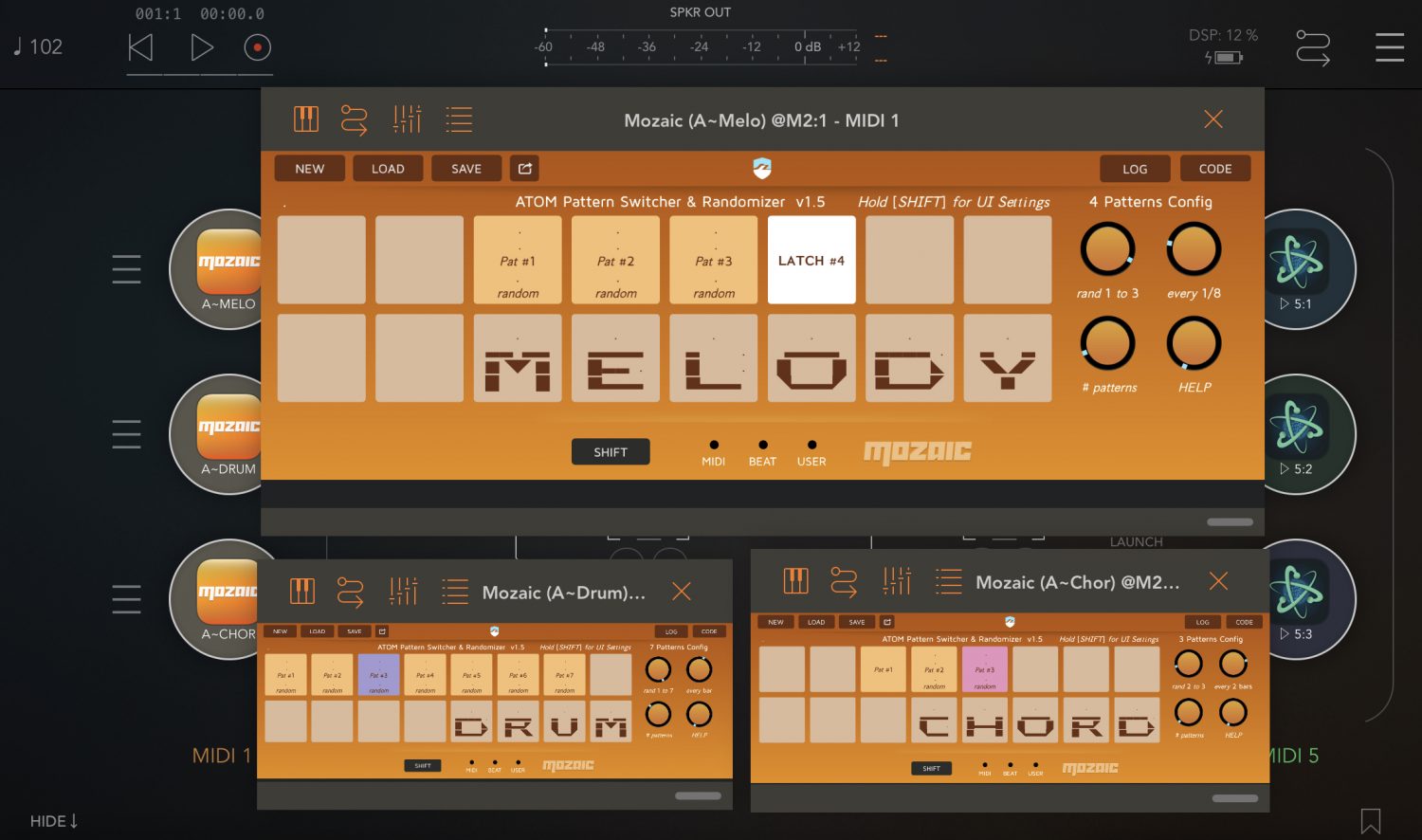 Pattern switcher for Atom Pianoroll² with randomization to generate melody and beat variations by synced random switching between the available patterns.

Setup
╰──────────────────
Direct the midi output of the script to a ATOM Pianoroll² instance that contains several pattern and dial the ﹟𝘱𝘢𝘵𝘵𝘦𝘳𝘯𝘴 Knob to the exact number of pattern used in the ATOM instance.
Taping a 𝘗𝘢𝘵 # pad toggles pattern latching. If unlatched, the script can issue synced random pattern changes if configured.

Knobs
╰──────────────────
* The ﹟𝘱𝘢𝘵𝘵𝘦𝘳𝘯𝘴 Knob needs to be dialed to the exact number of pattern available in the
ATOM instance it is controlling. It can be set between 2 and 16 patterns.

* The 𝘦𝘷𝘦𝘳𝘺 knob changes the random change sub division. It can be set between 1/32
and 4 bars.

* The 𝘏𝘌𝘓𝘗 knob toggles to the description.

Pads
╰──────────────────
The available pattern are colored orange and show a 𝘗𝘢𝘵 # label. If a pattern is latched, its pad is highlighted in white and labeled 𝗟𝗔𝗧𝗖𝗛 #. All pattern included in the 𝘳𝘢𝘯𝘥 range are marked with a 𝘳𝘢𝘯𝘥𝘰𝘮 label.

Tapping a 𝘗𝘢𝘵 # pad latches that pattern, tap the same pad again to unlatch. Tap another pad to change the latched pattern.

If no pattern is latched and a 𝘳𝘢𝘯𝘥 range is set, a pattern change will happen 𝘦𝘷𝘦𝘳𝘺 change division. The currently playing random pattern is marked with a configurable color (default: green).

UI Settings
╰──────────────────
If several instances of the script are used, it is helpful to make them distinguishable. Therefore a big label can be displayed in the lower pad row which is also set as icon name of the instance. Furthermore, the color of the currently playing pattern can be set.

To access the UI Settings, hold the [𝘚𝘏𝘐𝘍𝘛] button while the pads are visible and adjust the settings with the knobs.

* The 𝘱𝘭𝘢𝘺 𝘤𝘰𝘭𝘰𝘳 knob allows to configure the color for the current playing random pattern.
The colored pad is only visible if no pattern is latched.

* The two 𝘳𝘢𝘯𝘥 range directions will generate different pattern mutations if not all
available patterns are included in the range.

* A nice usecase is to setup different drum pattern (and one including some 1/32 rolls)
and then to randomly change between them using a 𝘦𝘷𝘦𝘳𝘺 1/32 change subdivision.