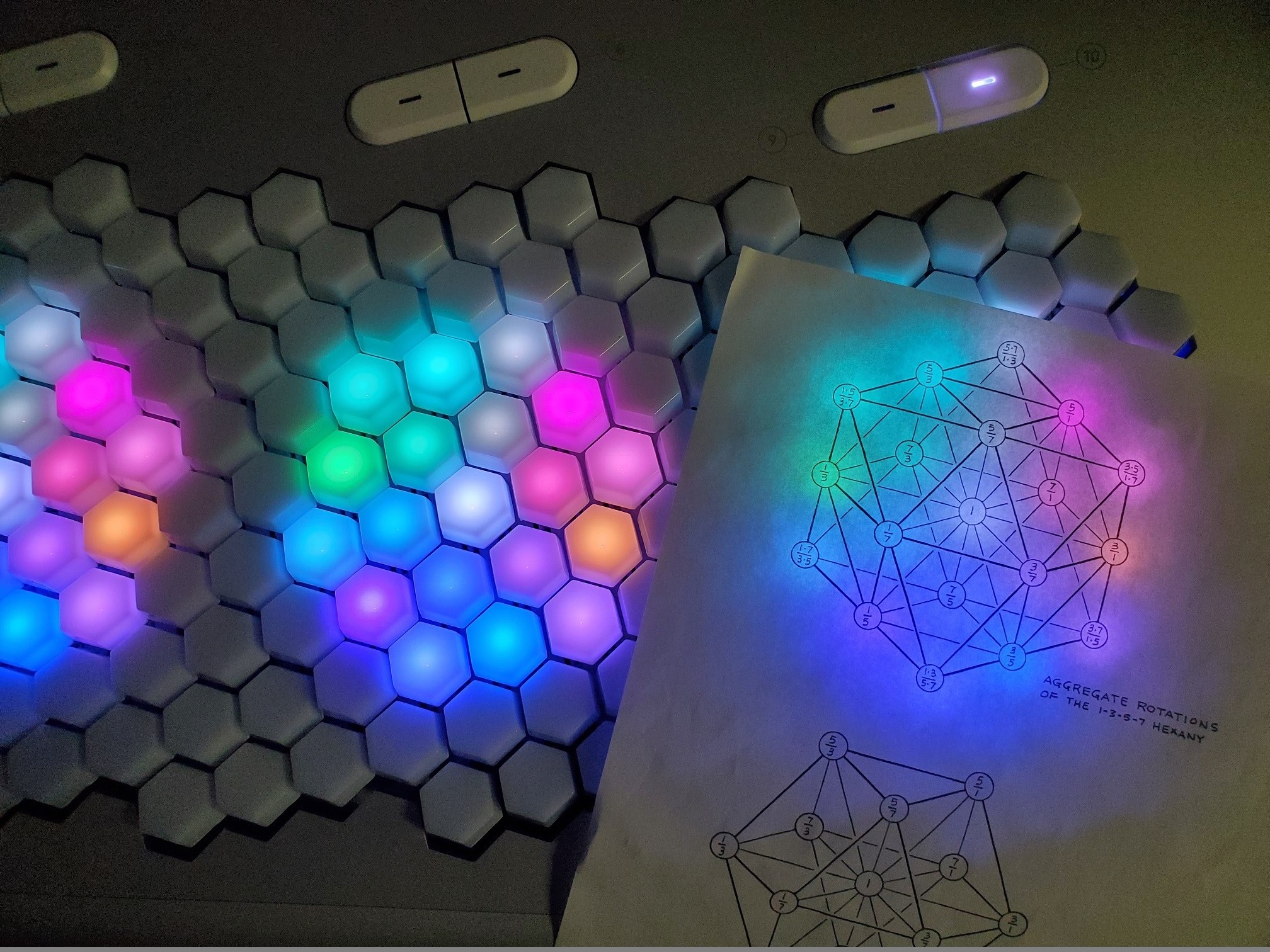 The Hexany Diamond and Stellated Hexany are three-dimensional Just Intonation pitch structures first envisioned by Erv Wilson in the late 1960s. By multiplying or dividing a set of four initial primary factors, a set of mutually harmonius pitches is obtained. When arranged on a tetrahedral lattice, the three-dimensional structure and pitch relations become apparent.

The Lumatone is only two-dimensional, but since these two structures are rather small in terms of the regions of the JI lattice they occupy, they manage to fit rather snugly onto a Lumatone’s hexagonally-arranged keys.

The Hexany Diamond is mapped exactly as it appears in Erv Wilson’s illustrations, but the Stellated Hexany had to be warped a bit to fit it on the Lumatone. The D^2 and ABC/D pitches have been moved to the top and bottom of the Lumatone, instead of being central and colinear in the third dimension. This makes fingerings involving these two pitches a little different than the others.

There are five copies of each structure in these mappings, each on a different MIDI channel, giving five octaves when using multi-channel-supporting software.

For the color scheme, I have used these four primary colors: A: red; B: green; C: blue; D: gray. In the Stellated Hexany, these colors are mixed according to the pitch formulation, with the numerator having its color at a stronger intensity, and the denominator at a weaker intensity. In the Hexany Diamond, this is reversed, with the denominator factors getting their colors at the stronger intensity. This allows otonalities to be easily identified.

I have included with these mappings a small sampling of .scl files for the Hexany Diamond and Stellated Hexany. I have also included an executable program to generate more .scl files for any four primary factors. It is a simple command-line application and should be easy to use. I created this program because Scala outputs the scales in ascending pitch order, but these Lumatone mappings expect them in lexicographic order, so the layout can remain consistent across different primary factors.

These mappings are not completely isomorphic, rather they are isomorphic only when following along the lines in the diagrams. Any direction-line is its own interval (or octave inversion), and will maintain its character no matter which two pitches it is played across. The same goes for triangles (triads) and tetrahedrons (tetrads).

More information on Erv Wilson’s work can be found at Anaphoria here:
https://anaphoria.com/wilson.html

These diagrams can be printed out and placed over the Lumatone’s glowing keys to better illuminate the pitches. Depending on the diagram printed, it may need to be shrunk down a bit to line up with the Lumatone. The one pictured here was printed at 85% scale.

ckline
17 PM
Chat about this patch on Discord! Download (8)