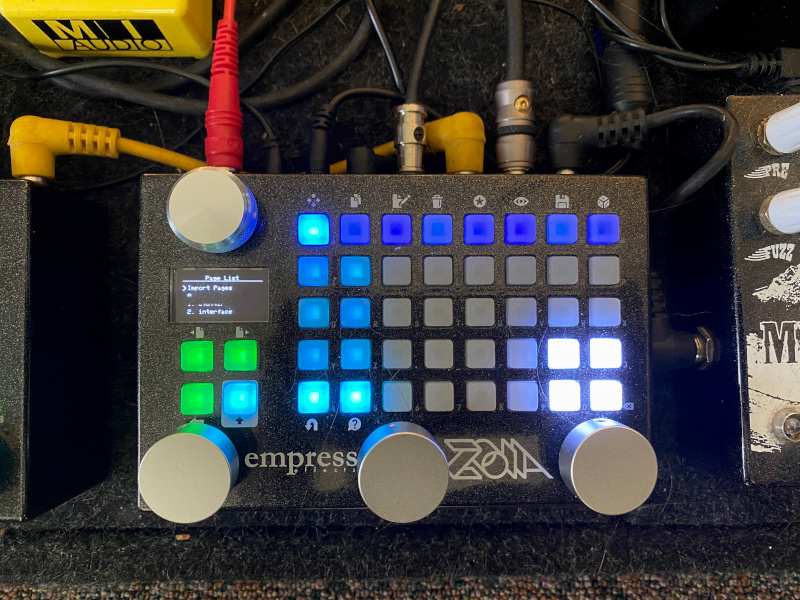 The original use of this was never going to be seen or shared outside of the Orphan Black themed video we made, so it had almost no interface or visual feedback options. I cleaned it up and made it solidly Left In –> Left Out for the sake of sharing.

My patches are mostly “always on,” and I run the Zoia in aux mode.

I tend to use MIDI to control the Zoia, so the original Helena patch is built around CC7 to sweep from the audio input (0) to the synth (1). Pitch and Gate are handled with the MIDI Note In module.

I’ve included a modified version (“Helena Pitch”) where the CV port sweeps between the two sounds, synth is controlled by the audio input. The processing path for this is on page 3, and a user may need to tweak the compressor or the negative input on the Comparator on page 3 if the envelopes aren’t triggering accurately.

In both cases, a 0 or “heel down” expression input will bypass the synth.

Right stomp is a drive added for the standalone pedal, normally on. I think noise synth benefits from being fed into distortion. The original patch used external distortion.

Middle stomp is the “Stutter” effect. Holding the middle switch will engage the tremolo effect, ramp, and slow down, until released.

Left stomp is an octave up for the noise synth.

The UI page tracks the tremolo along the top. The bottom right of the screen shows the engagement of the drive, and the left border rises with the octave.

The synth itself is very simple: a noise oscillator into a highly resonant filter. Both the LP and BP outputs of the state variable filter are fed into a mixer (ch 1&2) on the Noise page (page 4). An oscillator on p5 is also fed into the mixer (ch3) for texture and a little more note definition.

thunderpuppy
101 PM
Chat about this patch on Discord! Download (421)